The taxi is speeding at 100 km/h through the old town of St. Petersburg. A few night owls wander through the deserted alleys and defy the bitterly cold April night, which could not digest the last snowfall yet. „The Russians no good car driver“ says our taxi driver and speaks once more into the Google translator to deliver a halfway passable city tour at 2.30 a.m. One hand on the mobile phone, the other at the wheel, the foot a showpiece of pure lead, which chases us at breathtaking speed over the brightly lit Newskij Prospekt, as if we were followed by some kidnappers. Vladim needs about 30 minutes to drive from the airport to the DOM Boutique Hotel and leaves us behind with a friendly grin and the warmest congratulations. Triple market price! You can do it with tourists.

This is my first time in St. Petersburg and I am happy to have taken this step, because applying for a visa is not easy. The fun costs about 120 € and requires the dispatch of passport, earnings certificate, health insurance voucher including photo and invitation from the hotel to the Russian embassy. The DOM Boutique is not only top located in the middle of the old town, but is also characterized by a willingness to help, so that the process was finished in about 14 days. 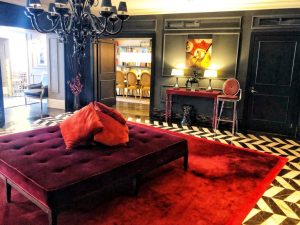 Day 1 begins and within 10 minutes I am standing in front of the impressive resurrection cathedral, whose highest bell tower is vulgarly under construction. How can a „good-weather photographer“ like me avoid such a scaffold?

With good weather and a ticket for the interior, because the Church of the Redeemer of 1883, built by Alexander the III in the old Russian style, has beautiful mosaics shining inside. Passing the countless Russian Doll souvenir stalls, the city takes me into its generously laid out heart of palaces, churches and stately buildings to release me at the Hermitage. The largest art museum in the world, which could devour the Louvre ten times over, presents no less than 65,000 works of art in over 1,000 halls, for which one should supposedly plan 70 years of viewing time. 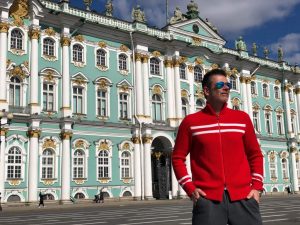 Clearly too much to start with, so that I go to the 360-degree panorama terrace of „God’s Inkwell“, as the 43-meter-high gold dome of Isaac’s Cathedral is nicknamed. 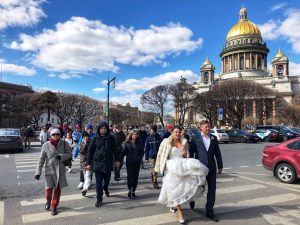 The view over the towers and domes makes you speechless for a moment and if you like to be speechless twice in a row, you can buy the ticket for the interior for another 350 rubles, because more marble, precious stones and gold can hardly be seen by the human eye. 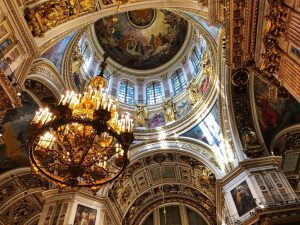 After so much „aah“ and „ooh“ I urgently need a caffeine and sugar kick, which I pick up in style at the bar of the Grand Hotel Europe. Bill Clinton already played the saxophone here and surely ate some tartlets. 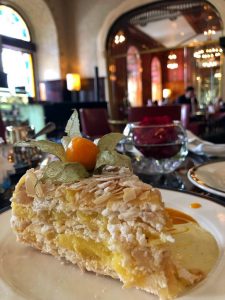 Back to the DOM Boutique Hotel, which is chosen year after year as one of the best accommodations in the city and impresses with its modern design and personal touch. The staff is also very friendly and happy to help with tips on sightseeing and taxi services. Due to the location at the summer garden and the Canal, one has absolute silence from the noise of the big city and still is always in the middle of the action. 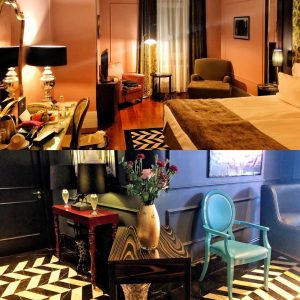 Well rested we go to one of the best restaurant temples of the world, the MR. Bo, where a young team has set up a small experience world of open kitchen, bar stools and dining tables. Disco beats run along with it and a well-heeled Petersburg audience enjoys wonderfully prepared main courses and starters. Pork belly, salmon or cod and first-class wines are served, while a team of six food artists sprays the flames behind the glass. 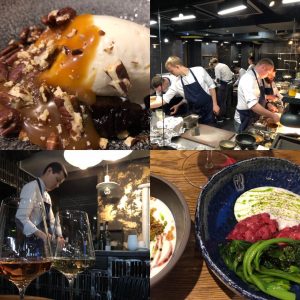 With all the achievements of an Indiana Jones, he never managed to find the missing Amber Room. He didn’t even try, so I took the Uber-Copy Yandex Taxi to Pushkin where the Catherine Palace is located. A few snowflakes sail to the frozen ponds and the waiting day-ticket visitors (700 rubles entrance fee), who first must queue until they are finally allowed to enter the magnificent gold palace. 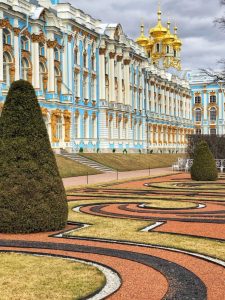 I pass countless travel groups to reach the big hall, where gold and mirrors shine so brightly. 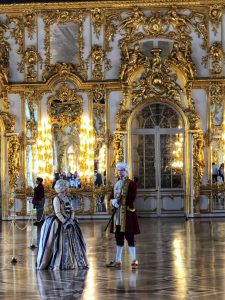 Plenty of photos are taken, until suddenly one stands without drum roll and applause in the world-famous Amber Room. „So that’s it?“ I ask myself and pull out the smartphone, just to be reminded by a Russian museum agent that you´re not allowed to take any pictures. I try to keep as much as possible in my memory, after all the original never appeared again after the Nazi stunt of 1941. 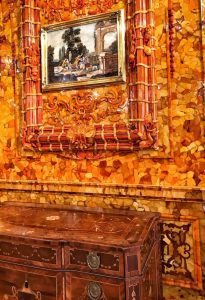 Without a guided tour it takes about 45 minutes to visit the rooms of the palace and you can walk through the pleasure gardens or witness the reconstruction of the castle church afterwards. 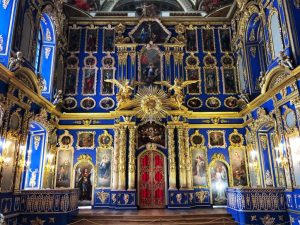 No stay in St. Petersburg is perfect without a visit to the famous Mariinsky Theatre, as it is probably the only opera and ballet house of world standing in the country. Since there is no nutcracker at hand right now, I decide on the opera Don Quixote in the venerable palace, although there has also been built a new building with better acoustics for 2,000 spectators. But long live the tradition, even if the performance and stage design were rather average. 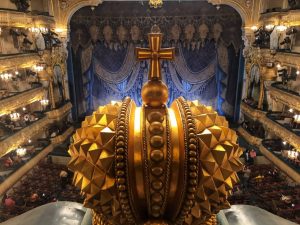 It was nevertheless a nice experience, which was flanked by the best steak in the Stroganoff Steak House as well as a cocktail in the famous Xander Bar.

Time to devote yourself to the second mystery of the Russian past, namely the non-survival of the Tsar daughter Anastasia Romanow, who was executed by the Bolsheviks together with the whole family on July 16th 1918. For this I cross the Neva and go to the Petrograd side, the oldest part of St. Petersburg, where the Peter Paul Fortress lies on the bank. It is Sunday and half of Petersburg is on its feet to enjoy the cold rays of the sun, just like the handful of men, dressed only in swimming trunks, freezing in front of the fortress wall and „cooling down“ in the Neva from time to time. The Russian man is clearly carved from a different piece of wood. 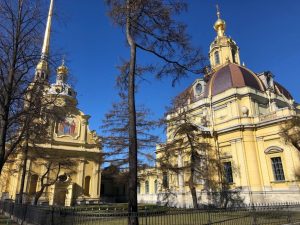 Already from a distance the golden needle of the Peter-Paul-Cathedral sticks into the steel blue sky and shows me the way to the last resting place of the Romanovs. My expectation is once again enormous and this time it is completely fulfilled, because the opulent baroque Church is a total work of art consisting of 39 tombs, in which one first has to find one’s way. 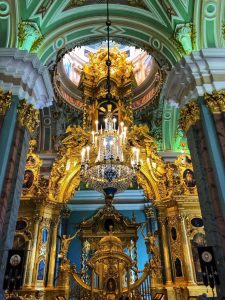 I trudge back and forth between the marble and stone coffins, but Tsar Nikolai II, the last of his kind, cannot be found at first, which is due to the fact that the remains of the murdered Romanovs, which were found in 1998, are housed in a small side chapel. Closed off by a cord, you can now see the stone tablets of the whole family, which was reunited with the lost bones of the children Maria and Alexej in 2007. 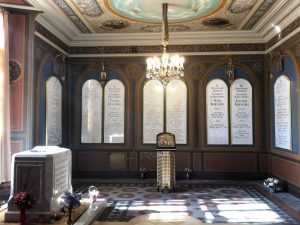 The circle of history closes, just as my time in Saint Petersburg closes with the visit of the Hermitage. Here the Russians kept all their art treasures, from Leonardo Da Vinci to Michelangelo, from the Roman Empire to ancient Egypt. 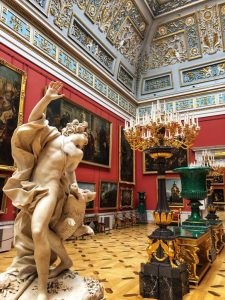 And yet they sink into the splendour of the rooms, like the Ark of the Covenant from Indiana Jones once did. Every single work of art, every mosaic in the countless churches of this city, every canal along the Neva and Mojka, every magnificent facade is just a shining comet in a gigantic universe of stars. This is Saint Petersburg. 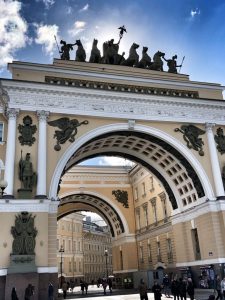 This article was written at the invitation of the DOM Boutique Hotel in Saint Petersburg.

Read also my article about London.