There is a world out there that is so much more beautiful than the one we normally live in. A world without roads, without noise and pollution, a world where the greatest gift is a sunrise over the grassy waterways of the Okavango Delta. I am back in Africa and it hits me right in the heart. So much originality, so much landscape, so much warmth. So many good-hearted people, so many wild animals, maintaining a last ecosystem in peace that began thousands of years ago and may have disappeared sometime. Yes, I am in the middle of Botswana, on the lookout of my &BEYOND Xudum Okavango Delta Lodge Suite, gliding my gaze across the plain, always hoping to find elephants.

Probably I just have to be patient, like the traveller who gets involved in the Okavango Delta adventure. Everything starts with the 2 ½ hour flight from Cape Town to Maun and if this plane seems small to you, you should be very happy about the mackair plane, because now you can go from airfield to airfield by bush taxi in 10 minutes, because hardly any of the lodges can be reached by car. 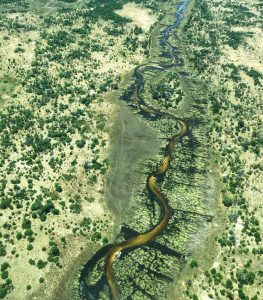 But the bird’s eye view over the green canal system of the Okavango Delta is priceless and one can almost wave to the elephants before gliding back down and up again. But at the sight of the numerous legacies on the runway, I wonder how the pilot would react if we meet a pachyderm during landing. But the touchdown is relatively smooth and a jeep from &BEYOND is on its way to greet us as soon as we roll out. „The friendly guide asks „Wanna make a joyride? and I have no idea what he means by that. 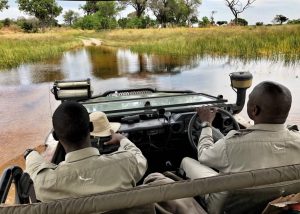 But the true meaning of a joyride shows itself only minutes later, when we cross the first of many following water points and pull up our feet so they don’t get wet. But always, if you think this doesn’t work out well, we are already through and take care of the unique animal world, which already plays the whole keyboard on the one-hour trip to the lodge. Elephants, lots of antelopes and a herd of buffalo mark a good start before we are received by the singing of the team members. 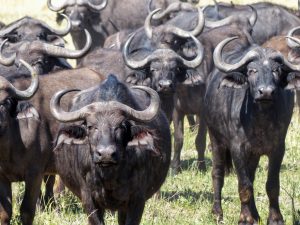 Then Guest Relations Manager Adi explains the special features of the facility to us: No solo runs in the dark, two game drives a day, the wake-up call is always at 5. And always remember: Eyes open, because the animals come to the front door, as we should experience enough in the next few days. 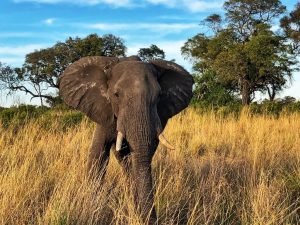 But now off to the room and here the Xudum team manages to completely enchant a highly spoiled travel blogger, because the suite exudes African luxury in the middle of the wilderness. 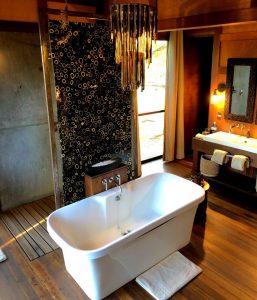 Bedroom with cuddly sofa, bathroom with free-standing tub and waterfall shower, lookout with chill-out area and its own pool with a view of the Delta. The world can be so perfect and I don’t know what to do first because of all the enthusiasm. At the end there will be the jump into the pool and a first class three-course menu on the veranda in the main house. 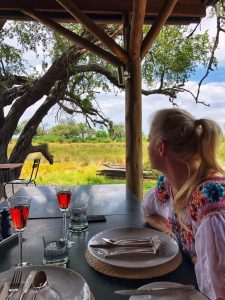 I go to bed early so as not to miss my wake-up call the next morning, which consists of a spoken „Knock Knock“, but I hardly expected the stimulating night program. Just in time for the witching hour 2 kudus sneak around the chalet and seem as close as if they were lying right next to me. Hoping that they won’t make it through the mosquito net, I try to fall asleep again before we leave for the first game drive, which relies on the services of a genuine „wildlife spotter“, who always keeps his eyes on the animal kingdom on the front of the hood. 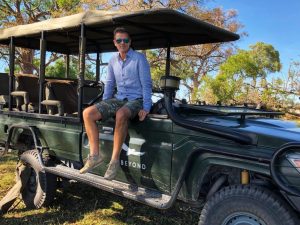 Well, I think to myself, with such a wildlife spotter it’s going to be almost slipping in the enclosure now, but Botswana’s animal world is adorned this morning and beside gazelles, zebras and wildebeests the Big 5 are still waiting for us. Shortly before I want to change our „spotter“, because it feels like he’s looking past everything that’s moving, I have to pay tribute to his true strength in the end. With Argus eyes he analyzes fresh manure on an old track and spies a herd of rhinos in the bushes. 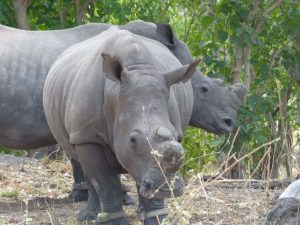 True to the motto of every tech conference: „Just follow the latest shit“ it takes a sensitive feeling to get to the big things in (animal) life. Respect my dear, that was not easy. After 4 hours I get shaken up and handed over to the lunch table and sent for 3 hours for the well-deserved lunch break. 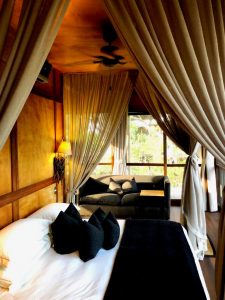 Another highlight should follow with the stylish mokoro trip through the waterways of the Okavango Delta. Our guide O.T., no retired rapper, directs us with a stick through the reed grass, which is due to the dry season, quite high out of the water and difficult to penetrate. 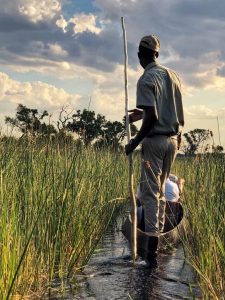 The light falls in warm and saturated rays over a landscape, which seems to originate from a Monet painting of African coinage and is hardly more beautiful imaginable. Shortly before returning to the lodge, we come across a „floating bar“, which has been opened by the wonderful &BEYOND team around our butler S.P. in the reed. Champagne to the Sundowner pleasing? You bet! 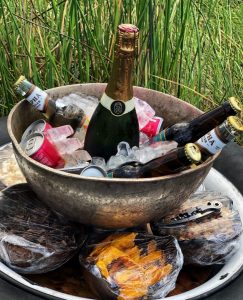 The second day starts with a game drive through wonderful green pastures, which remind me spontaneously of a huge golf course because of the short stalks. In this sense probably God’s own golf course, which offers best conditions for antelopes, zebras and impalas, but unfortunately not yet for lions or leopards, which we would like to get in front of our lenses. 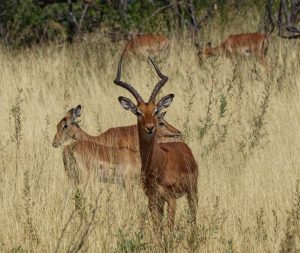 O.T. and his jeep really give their best and follow every trace, but the safari luck is still waiting for us. 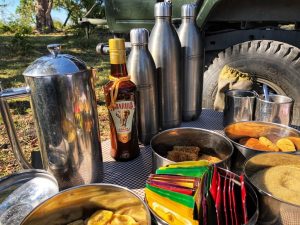 The team rebuilds with a hot coffee-amarula shot and with motivational slogans and stimulation phrases we start the second part of the game drive, which is rewarded with a hunting leopard at the end. 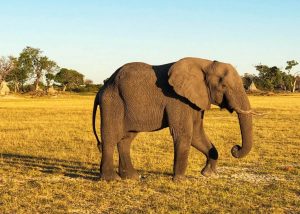 But now off to camp, because it is already 10.30 a.m. and therefore time for the first Gin Tonic. „Really? Already?” I ask my friend S.P. „Yes, it has to be. I made it especially for you“. Well, S.P. can be really convincing and releases me into the pool siesta, which is more than welcome at 35 degrees in the shade. 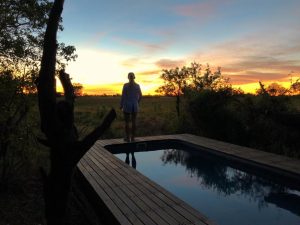 It is already dark when we approach the camp with rotating flashlights. A hippopotamus herd is dazzled and disappears in the undergrowth. In the distance the beacons of the lodge are already crackling, because today is the traditional Bouma evening, where the Chef de Cuisine with his team serves the menu „Made in Botswana“ directly over the hot fire bowls. We change location, sit with candlelight directly in the warm sand and enjoy the extraordinary creations of meat and fish. A perfect conclusion for this extraordinary day, which has offered over 8 hours of game-drive and sends us into the starry night with lots of stories and observations. One or the other is still sitting at the campfire and shows, similar to old war wounds, the best snapshots of the day and enriches our round. 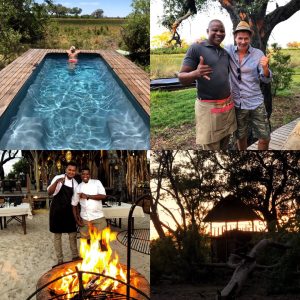 My conclusion is: Apart from the wonderful landscape, which is characterized by large green areas, flooded canals, mighty Baoab trees and the striking termite hills, it is above all the unique location of the Xudum Lodge, which makes a stay so spectacular. It may be that the animal density is higher in other national parks, but here you can drive off the beaten track and have elephants, water buffalos or rhinos all to yourself, because the &BEYOND jeeps always split up to avoid mass scenes. We almost got our lion in the end, says O.T., when he points to the eroded skull of a water buffalo and says: „The lions caught him. 3 years ago“. Wow, that was close. 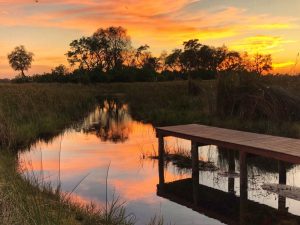 The time has come to say goodbye to the people, the animals, this unique landscape and of course the &BEYOND Xudum Lodge.

One last time I sit at the porch and look out over the endless reeds of the Okavango Delta. Not a hundred meters away from me an elephant family steps through the knee-deep water and turns around to me. One last time. 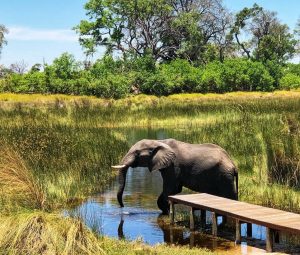 This article was written at the invitation of &BEYOND. Many thanks to the great team of Xudum Okavango Delta Lodge and the wonderful Kasia Sliva of &BEYOND, without whom this stay would never have been possible.

There are even more expeditions into the animal kingdom in my article about the Serengeti.