You are in Sweden, when the singing national monument ABBA welcomes you at the airport with an original performance of Fernando. It is already night in Stockholm and a clear starry sky watches over the snow-covered streets of Gamla Stan, the old town and nucleus that lies like a mini-island between the north of Norrmalm and the hip Södermalm.

Amidst the hustle and bustle of restaurants, cafes and shops lies the wonderful Victory Hotel which has been owned by the Bengtssons family for over 30 years. 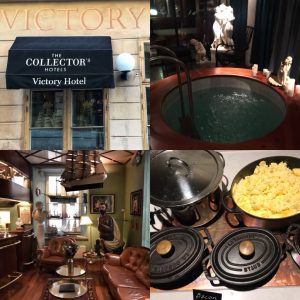 The founder, Majlis Bengtsson, is now a proud 88 years old and still works for her hotel every day, with one exception: „On Wednesdays, she regularly frees herself. Because then she always goes to the hairdresser „so the confident response of my sympathetic hotel guide Lisa. Seconds later I stand in front of the remains of the even older city wall, which runs through the middle of the Victory Hotel and delayed the construction in 1985 by a full 2 ​​years. Today, the uncovered remains of the wall beautify the underground breakfast room and are a pilgrimage site for school classes and historians, which may also be here because of the outstanding scrambled eggs with bacon. The entire hotel resembles a perfectly restored frigate from the 17th century and is literally plastered with devotional and ship models. Only the sauna area brings a little Italian feeling in this maritime work of art. A small pool attracts my attention and my frozen bones tremble with joyful excitement, before Lisa lets out the air or better the water: „No, this is not a bubbling Jacuzzi, but our ice basin. It´s wonderfully refreshing after the sauna „. 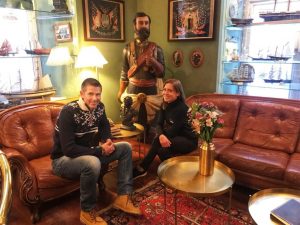 Yes sure. My bones are trembling again with cold and I pack them under the warm blanket in Captain Lundgren’s cabin, so the official name of my room.
Day 2 starts with a bang and it pops through my window in the shape of the morning sun. It is 7 o’clock in the morning and Stockholm shows its best smile.

Get out of your bed old man and pull over to the Royal Palace, where I share this early morning moment with a Japanese tour group before I move over to the frozen ships in front of the National Museum. In the background, the perfectly bleached Art Nouveau chain of houses on the Strandvögen Promenade draw my attention. 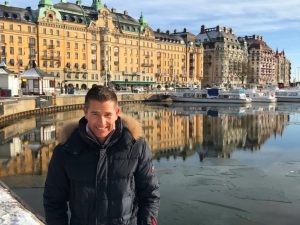 From here you´ve got a perfect view of the docks of Ladugardslandsviken (I did not invent this name) and the bridge to Djurgarden. You can spend a whole day here alone, if it were only a few degrees warmer. In search of new gloves, I pass the famous Saluhall market hall and the Viennese Art Nouveau jewel named Kungliga Dramatiska Teatern, whose gold leaf sculptures sparkle in the sun. 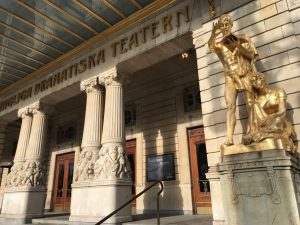 No less impressive is the hotel, bar and restaurant complex called Berns Salonger, which is located on the noble Berzelii Park and close to the next highlight, the King’s Garden (Kungstradgarden). Today the kids are skating around an equestrian monument and enjoy this wonderful atmosphere. Straight ahead is the Royal Opera, to the right the picturesque wooden church of Jakob Kyrka and in the back the NK, Stockholm’s most exclusive fashion department store, which is only topped by the nested shopping stamp Sturegallerian. 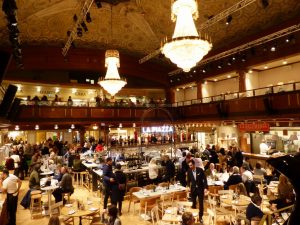 And here I finally find my gloves, made of Swedish leather, handmade in China. The trip ends as it began with decent rock music. This time it’s not ABBA, but the Killers, who made the long trip from Las Vegas straight into the sawn-off golf ball of the Ericsson Globe. 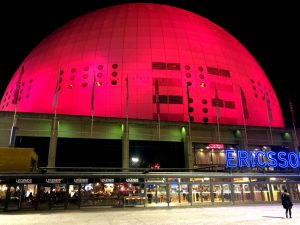 Unfortunately, the concert evening starts anything but party-like, because opening act Juanita Stein gives her best to drive the crowd to flight with her depressive mix of melancholy and bar music. Good that most of the spectators were late, so that they could start directly with Brandon Flowers, the singing reincarnation of German talk show master Markus Lanz and Elvis Presley. With the booming basses of Mr. Brightside, a properly shaken audience was happily released into the freezing cold night. „Stockholm rocks“ even in winter time.

This article was created with the kind support of the Victory Hotel Stockholm and the outstanding organization of Johanna Olsson.

Here is the sequel of Stockholm in winter.