The day kicks off early with a lost Olympic final in ice hockey and if this sudden death after overtime wasn´t pain enough, the next blow follows immediately. Without warning, I slip on the glassy cobblestones of Stockholms Riddarholmen and can be happy that my fall was completely unobserved. But maybe I should check on YouTube later?! The -11 degrees stun on the spot and I drag myself to the beautiful vantage point, the Evert Taubes Terrass, where the panoramic view extends from Södermalm to the striking Stadshuset.

A few seagulls circle over the iron sea, which has disappeared under a dense layer of ice. The winter has Stockholm in its grip, but the clarity and silence on the lively Old Town island Gamla Stan has something magical. 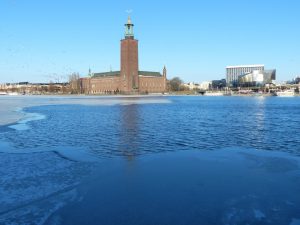 Let’s devote ourselves to the heart of Sweden and that beats in the Royal Castle, which lies majestically on the north side. The rooms and staircases are really impressive and spread over 2 floors.

However, current events rarely take place here anymore, as the royal family is now to be found exclusively in the beautifully landscaped Drottningholm Palace. I particularly liked the gallery of Charles XI, where festive banquets were held for over 170 guests, as well as the portico and the Reichssaal.

The treasury is included in the price, but except for some old crowns and jewels, there is nothing much to see. Let us dedicate ourselves to a cultural contrast program and for that, as we often do in Stockholm, we must change the island.

First, we walk over the bridge to Skeppsholmen, from where only a ship can bring us to Djurgarden, home of the 2013 opened ABBA Museum. For the converted 25 € entrance fee there is not really much to see except of some clothes, guitars and golden records or replicas of the studio, tour bus and a helicopter. But the place has it´s atmosphere and it’s the first museum I left with a smile. 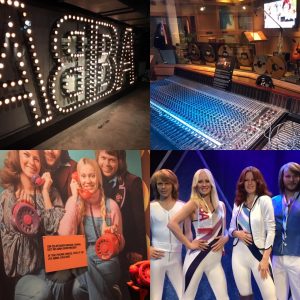 Maybe it’s because of the interactive elements. Where else can you make a digital transformation into Agnetha and sing Waterloo, or even appear as 5th ABBA member on the show stage? And maybe the red telephone rings right away and Björn, Benny, Frida or Agnetha are at the other end to surprise visitors. Even though there is no ringing, I leave the ABBA Museum with a slight disco fox in my lower leg and make my way to the Birger Jarl Hotel, in northern Norrmalm. 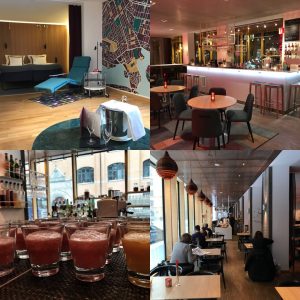 As if my wonderful organizer Shane had guessed my party mood, he put a bottle of „champagne on ice “ in the modern styled suite. The Birger Jarl is perfect for exploring the city, as the metro leaves almost at the door and the main shopping streets are within walking distance. I don´t know why I came up with the daring and reckless idea of ​​going to an ice bar in the middle of winter, but punctually at 6:45 pm I stand in front of the ICEBAR and get immediately my Arctic poncho to compensate the constant -7 degrees inside. A drink called Sunshine, which is served stylishly in an ice-glass brings a little sun into my body. 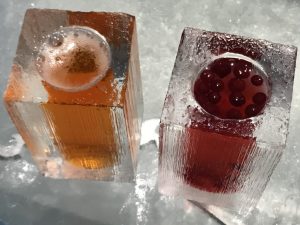 The fun is over after 45 minutes and in view of the minus degrees it is really time to go.
A few more gastro-tips to conclude. Whether Italians, Americans or local home cooking: I had them all and can also recommend them unreservedly. In the old town is the oldest and allegedly best cellar restaurant called Den Gyldene Freden, which already served Swedish specialties in 1722. Today I enjoy healthy food in the form of salmon with cabbage and potatoes, which means that in the next few days only calorie monsters like burgers & chips at Barrels Burgers & Beer and pizza from Giro will land in my stomach. The giant monster waits at the Wiener Caféet in the form of a Semlor for me. 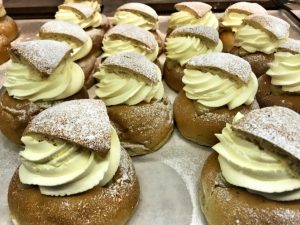 Sounds like a primordial figure from the Lord of the Rings, but is actually a wheat flour cake with almond paste and whipped cream, which was previously baked for 6 minutes in the oven, then solidified to perfection. Seems like the best preparation for a jump into the underground of Stockholm, because the metro stations of the Tunnelbanan are known as the longest art gallery in the world. 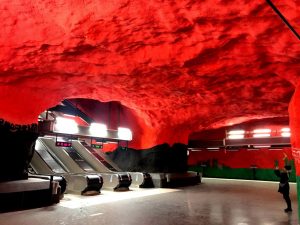 At the Solna centrum station you glide down into a red vault of hell, while in the T-Centrale you are surprised by cobalt-blue floral motifs. My highlight is the Kungsträdgarden, where even columns, stone sculptures and entire waterfalls were integrated into the red-green work of art. 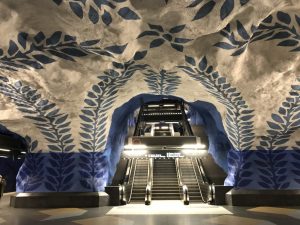 That’s why the question „Is it worth to visit Stockholm during winter time?“ is almost self-explanatory, because in addition to the wonderfully snow-covered cityscape, there are so many indoor destinations to visit that a long weekend is not enough. We’ll see each other again in summertime and hopefully it will keep me on my feet, after my second fall on the ice cover at Djurgardsbrunnsviken has almost pushed me under pack ice. This time with a large audience and a loud applause, just as I like it. 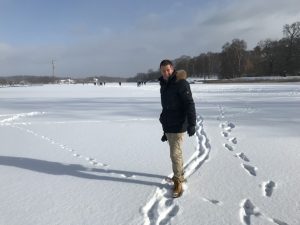 This article was created with the kind support of the Birger Jarl Hotel in Stockholm.

Here you can read Part 1 of Stockholm in Winter.