By turnagain In English
Above5 Croatia Dubrovnik English GameofThrones Kazbek

In or out? Man or mouse? No trivial matter if you consider the outside temperature of 15 degrees Celsius. But the words of Vedrana Vukosav, sales manager of the Hotel Kazbek, give me the last push. „So far nobody has jumped into the pool“. And this makes a more than ordinary impression. So at least I jumped inside and enjoyed this gem at the Marina of Batala all by myself.

Only 13 rooms are available in this 16th century palace. „The house has seen a lot and served as a school and even as a prison for some time“ Vedrana told me „2005 it was bought by a Swedish couple and they converted it into a 5-star luxury hotel“. 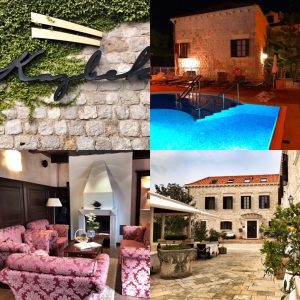 The location is really great, because through the thick palace walls you are almost in an own, historical world. Nevertheless, you´re in about 10 minutes in the wilderness of the old town. In the summertime Dubrovnik is very crowded, but in the off-season it is really fun to stroll through the narrow, restored streets. 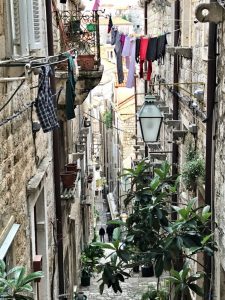 Through the Pile Gate, you will come straight on to the Stradun, the main traffic route. Nice shops and surprisingly good restaurants characterize the image of the old town. On top, wonderful churches such as the Cathedral or monasteries of Franciscan and Dominican monks. The former, however, does not really offer much, apart from a small idyllic courtyard. Then rather a round trip of the wonderful harbor with the St. Luka Tower. 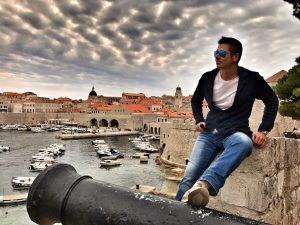 The boats and ferries to Lokrum or Mljet departs here daily. At the port there are many elegant cafes, such as the Gradska Kavana Arsenal, where you can choose between sea and city views. I opt for a place in the sun and for caprese with a shot of rosé. Afterwards it is time for a change and therefore for coffee and crêpes with banana and chocolate filling. And because the whole calorie-desaster is still to be increased, I cry for additional cream with vanilla ice cream. 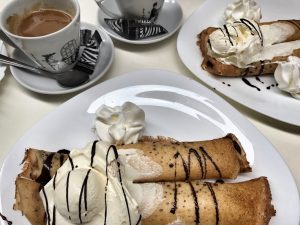 The store is called Dolce Vita and that´s exactly the way it feels afterwards. Movement is a necessity now, and the thick walls feel right for me. No snapper for 20 €, but the clear highlight of the old town. And an absolute „must“ for fans of the US series Game of Thrones. The fortress wall winds around the old part of the town for about 2 kilometers and you can quickly reach operating temperature. 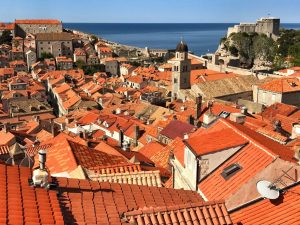 It is an eternal up and down between mighty towers, small cafes and narrow masonry. The red tiled roofs are the most striking and form a perfect contrast to the eternal blue of the Adriatic. Remarkably new and restored is not only Europe’s best preserved wall, but also the housing itself. The war in the early nineties has destroyed a lot and forced the inhabitants to build up new roofs. Do not miss the fortress Lovrijenac, which is just outside the „Walls“. This fortification from the 14th century is not only included in the entry price but offers additional viewpoints on the historic heart. 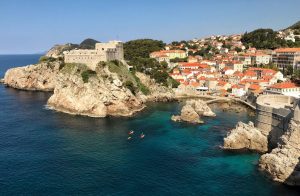 If you want to celebrate the sunset not by the sea, but with a glass of Red Wine and an excellent beef tenderloin, the Above5 is the place to be. Sedi, the manager of the small hotel restaurant, welcomes me already at the entrance. After three sentences of English we switch quickly into German and I notice his Swiss accent. „I come from Serbia, but I grew up in Zurich. And after more than 25 years, I now go to Dubrovnik „. His wife Anna has built up this little restaurant dream in the middle of the old town 4 years ago. For this, an apartment on the 5th floor was sacrificed and turned into a modern kitchen. 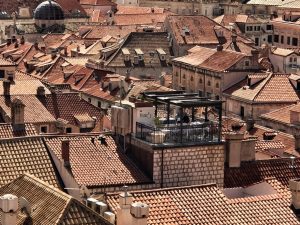 Sedi and Anna also show no compromises in food and ingredients. The meat, with the sound name Rubia Gallega, comes from Galicia. As sides they offer me grilled vegetables and a cream of potatoes. And by the way, on Dubrovnik’s only roof terrace, the sun goes down and transforms the surrounding into a painting. What a beautiful night, what a beautiful city. The perfect trip for an extended weekend. 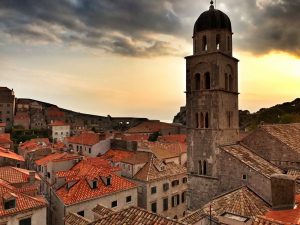 This article was published with the friendy support of Hotel Kazbek.

Read also my article about Stockholm.