The land of the Maya stretches on a peninsula in the Gulf of Mexico. It is an interesting mix of culture and all-inclusive program. So far, I’ve always been skeptical about the Mexican Spring Break, but after Machu Picchu last year, I really wanted to delete Chichén Itzá from my bucket list.
So off to Yucátan, off to Merida and first to the more „secluded“ cultural sites in the north-western part of the country.

It works amazingly well with the rental car despite the bad quality of the offered vehicles. The roads are in excellent condition, the signposting is absolutely sufficient and there is even a highway that runs across the country from Cancun to Merida. First I move on the Puuc route in the western part of Yucatán and can hardly believe my bad luck. The vegetation shows me that she can get along for a year without rain. But apparently not today. In Uxmal it rains in streams and so I drive directly further into sunny Kabáh, just 14 kilometers away, where a mighty palace of 12 platforms and altars flashes through the branches. 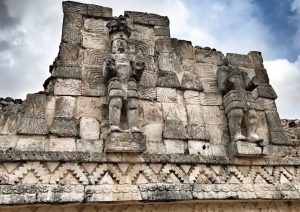 Only a few tourists have strayed here and so I walk around the ruins almost on my own. Black-iguanas populate this place like it´s their planet. Just 7 km further down the road I come to the „place of the ants“ or better known as the Mayan ruins of Sayil. A richly decorated palace with originally 90 rooms, stands completely deserted in the middle of the jungle. 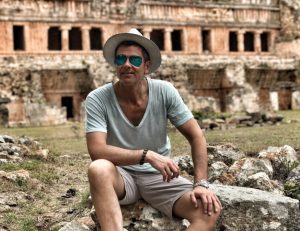 If only I had my Leather jacket and whip now. Instead of playing Indiana Jones, I decided for a coffee break in a splendid chocolate museum. What, however, escapes from the coffee machine is the dilution of a long past epoch. It was coffee, quite early. And it was also a chocolate biscuit. Quite, very early. Because meanwhile mold has conquered my lovely biscuit. I turn with horror just to be beaten by Mayan culture a few minutes later. 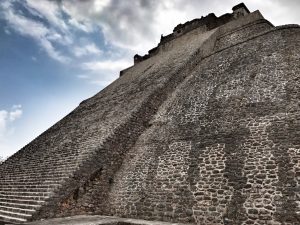 Uxmal, with its mighty pyramid of the magician, impresses even the largest lowbrows. The approx. 13 $ entrance fee are top invested, because the area is huge and even offers a ball playground with stadium atmosphere. Everything built between 900 and 1100 AD. 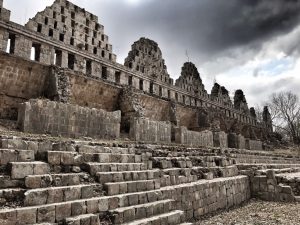 With such an overpowering, Chichén Itzá only could lose, but that it would immediately drain, surprised even me. Nothing against commercialization, but this large number of souvenir stands blocking ways in the excavation grounds is a bottomless insolence. The view is constantly distracted, the ears deaf through mouth organs, which are supposed to imitate a panting Maya panther. At least now and then, UNESCO must intervene if it should fulfill any purpose other than certification. In addition, the masses of hobby archaeologists with beer belly and soccer jersey. Unfortunately, or because of this, the sites are no longer accessible since 2005. 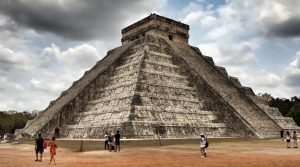 Everything is fenced and well protected from the wandering mob. This means that the Uxmal feeling can not be reproduced at any time and there is no mystical atmosphere at all at Chichén Itzá. A pity, especially if you admire the 30-meter high pyramid of the Kukulkán which is really sensationally preserved.

But maybe it’s different in Coba. The quite extensive terrain is only about 40 kilometers from the Caribbean coast and although off the classic bus tours, countless untrained buffet acrobats torment the 120 stairs to the top of El Castillo, a pyramid used by Maya priests for blood sacrifices. 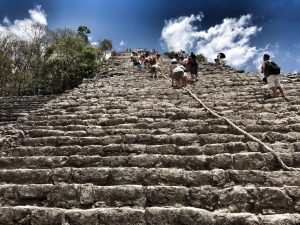 Today there are only sweat and calorie sacrifices and so Coba is probably the only excavation site, which can be visited by mountain bike or bicycle taxis. 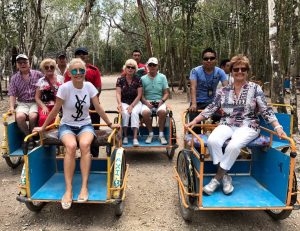 Who believes Chichén Itzá is overrun, made definitely no attempt in Tulum. The famous Mayan landscape with sea view swells over from bored day visitors. The paths are quite narrow and every few meters a group meets with their guide for location discussion. Photographs can only be made under extreme conditions. And this is really a tragedy, because the settlement is spectacularly located and for 70 pesos comparatively cheap. 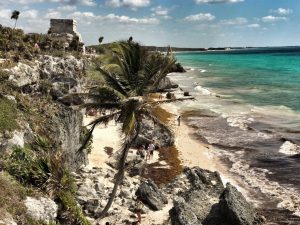 A visit to Yucatán without a detour to a cenote would be classified as grossly negligent. So I decide for the cenotes X’kekén and Samulá on my way to Tulum. The former is more like a dripstone cave with a subterranean lake. The characteristic hole on the ceiling is quite narrow here, so that only a small amount of light illuminates the cave. 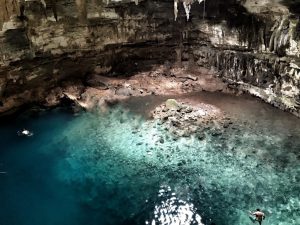 The Cenote Samulá, with its gigantic cave space, is much more spectacular. The green water glows like an emerald and finally persuades me to take a bath. The Riviera Maya is famous for its white beaches and clear turquoise waters. As there was no Airbnb-Villa directly on the beach, it ended up in an all-inclusive-facility. But the Dreams Tulum Resort & Spa is really an exception. 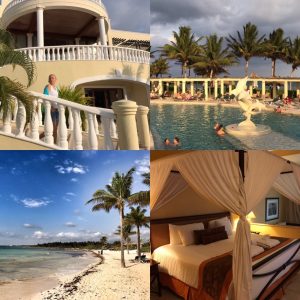 The rooms are spacious, the pools are pretty cool illuminated and the beach is perfectly raked. In the morning, beach workers carefully remove all the remnants of algae. In the evening, you choose between three excellent restaurants and in between you learn the cocktail card by heart. And yes, I admit, they are still very good. In this sense, Viva Mexico. 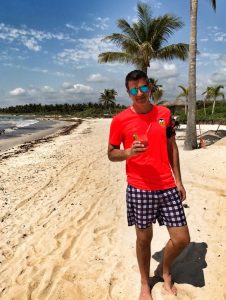 Here is the way to my report about the beautiful Merida in the north of Yucatán.