It is shortly after 8 pm, when I finally pin the code into the powerful entrance of the Maison Azul in Merida. Reluctantly, the heavy gate gives way and I tap through a half-dark of shadows, religious artifacts, and bloated angels. The palace reminds me of the fabulous world of Carlos Ruiz Zafón and shines and enchants at first sight.

My hostess Sherry has lived this domicile for many years and furnished it with love. Today, the 4 double rooms are available to guests who choose between the Master and Mural suites or the large guest room. 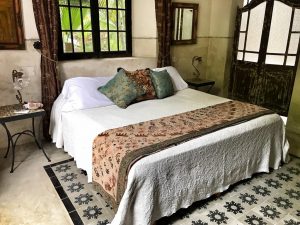 If you’re looking for something more private, you’ll find it in the Casita, an annexe that is located directly on the Venetian pool and has an open interior and exterior shower. 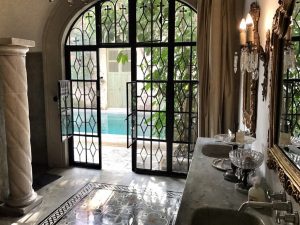 A small park with fountain also belongs to the romantic quarters. But back to the pool, which is the social center of the palace and part of the patio, which depicts social life with sofas, rocking chairs and the dining table. Sherry also has a restaurant tip for me right now. The Apoala at the wonderfully lively Parque de Santa Lucia, is to serve the best Mexican food of the city. And Corona of course. But without the lime and poured in the glass. 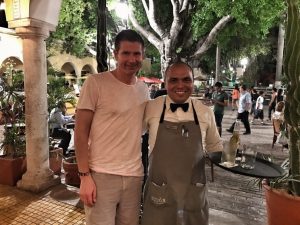 When I appeal to my Camarero Manuel, he just grins: „If you want the tourist number, no problem. I’ll get you another lime from the kitchen. “ Afterwards there is fine grilled fish or steak, perfectly arranged as in a gourmet restaurant. Every Thursday, the Serenada takes place and the Parque de Santa Lucia is transformed into an open-air stage.
Folklore and trumpets instead of rock and roll and disco beats. 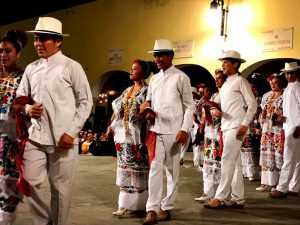 But Merida has more to offer, such as the Plaza Grande, dominated by the Catedral de Merida.
Here you’ll find the most magnificent buildings, such as the Palacio de Gobierno Palace or the Palacio Municipal, built in 1892. Afterwards, I let myself go through the colorful streets and enjoy the atmosphere of Merida. 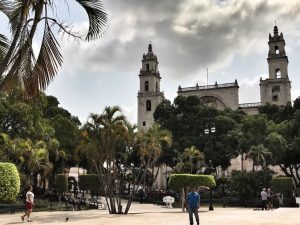 With all the hustle and bustle, I miss the authenticity of the South American colonial cities like Quito or Cusco. The markets are more effective, the shops cheaper and the people more western. For this, Merida glows with an outstanding architectural certificate of the Maya. Dzibilchaltún, a 20 km2 area with more than 9,000 ruins, temples and palaces, lies about 14 kilometers north of the center. 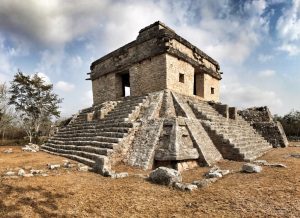 At the entrance, I am already informed that in half an hour, this site will be closed. No reason to turn around of course. Instead, I step on the accelerator pedal. A keeper would like to bring me around the temple of the seven dolls, but I bark him out for the remaining 10 minutes. The rectangular temple stands on a square platform like a solitaire in the landscape. What a place to seal your fate.
Time to go, time to hit the pool. 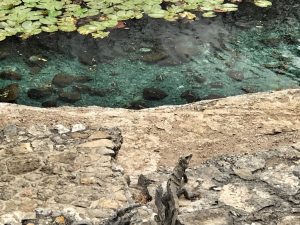 Read also my article about Tulum and the Riviera Maya.