If Michelangelo looked down on his Florence from heaven, he would be deeply impressed. Everywhere his work is omnipresent, everywhere people try to emulate him and create images of his monument. None of them will ever reach him, the artistry with which he once created the David sculpture is too complex and masterful for that. He would look down on the Galleria dellÁcademia, where his 5,17 m high monumental figure can be admired today and would be proud of himself and of his city that offered him this forum. It is the place where the angels dream.

Florence is a tribute to Italian culture and joie de vivre, which is reflected in the city’s alleys, restaurants, museums, stores and hotels, such as the unique Hotel Lungarno, which belongs to the Lungarno Collection and therefore to the House of Ferragamo. 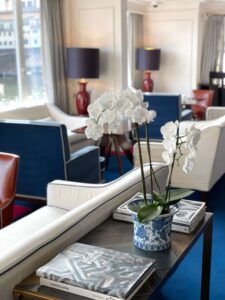 It is not only the first fashion hotel in the city with the irresistible view of the famous Ponte Vecchio, but an art exhibition with over 500 exhibits to admire in the rooms, hallways and lobby. 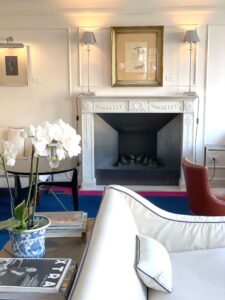 The repertoire ranges from Picasso to Cocteau, and my host, Valeriano Antonioli, CEO of the Lungarno Collection, is clearly proud to direct the best house in town. Renovated for 13 million euros in 2018, the former grande dame has become a beautiful young woman, says Antonioli, who has managed luxury hotels in St. Petersburg, LA, Phoenix and Sardinia. He has even played tennis with Vladimir Putin, chatted with Beyoncé at an NBA game or organized an important congress for Barack Obama. He himself is long part of the history of this hotel and fits perfectly in this incredible city. 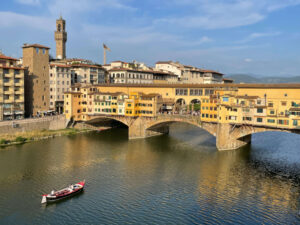 From my room, I enjoy the view down to the river and watch the colorful hustle and bustle on Florence’s oldest bridge, where today jewelry merchants, street musicians and tourists divide this 95-meter eternity among themselves. It’s almost too good to be true, I think to myself, and start my day with breakfast on the terrace of the Hotel Lungarno, where I sip my first cappuccino. This is accompanied by omelettes with croissants, muesli and fruit salad. 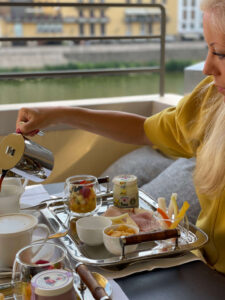 Although the city is already full of people at this time, there is a dignified calm in the hotel that is contagious and gives strength for the upcoming cultural program.

The city is dominated by its cathedral, Santa Maria del Fiore, which seems to cast a spell over me with its 107-meter-high dome. 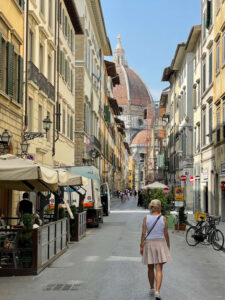 So I stroll toward it and am first enchanted by the street painters at the Mercato del Porcellino, who are trying their hand at Vermeer’s „Girl with the Pearl Earring“ in addition to the famous image of David. 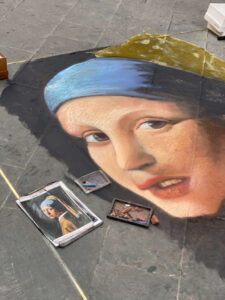 Chalk stroke by chalk stroke, the work of art builds up and shines in powerful colors, just like Florence on this beautiful morning that seems to know no layer of clouds. 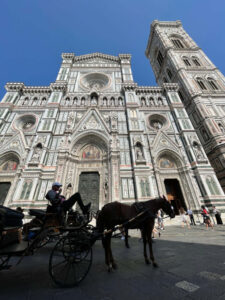 The forecourt to the cathedral is already filled with travelers lining up to get a glimpse of the nave, so I head directly to the Galleria dellÁcademia for a close-up look at that statue of David that Michelangelo created from a single block of marble between 1501 and 1504. 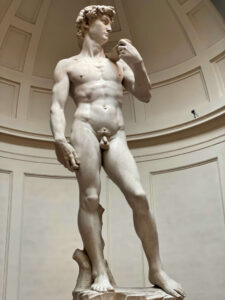 Hardly any figure is more famous and perfect than that David who carries the slingshot over his shoulder to take up the fight against Goliath. 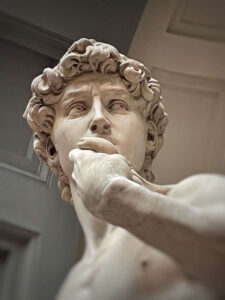 I’m impressed and go around the figure several times, before walking to the Palazzo Vecchio, where the great duel between Leonardo da Vinci and Michelangelo took place in 1503. 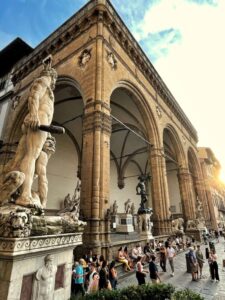 Both artists were each supposed to produce a battle painting in the Hall of the Five Hundred, but none of their approaches was ever completed. Nevertheless, the hall is an absolute must for any visit to the city, just like the Medici’s private rooms, which can be admired here. 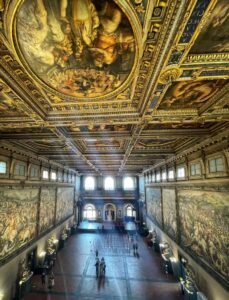 After the cultural treat, it’s time for a spritz on what is probably the city’s most beautiful rooftop terrace, which can be found at the Hotel Continentale, which is also part of the Lungarno Collection. You need a bit of luck or good relations with the PR manager Paola DiCredico to get one of the few seats at this rooftop bar. In return, you get to nibble on the lush life for a drink or two afterwards and enjoy the view of Florence’s red-tiled rooftops.

The Ferragamos own four of these luxurious city palaces, which reflect a coordinated hotel ensemble in close proximity to each other, culminating in the Michelin-starred Borgo San Jacorpo restaurant at the Hotel Lungarno. 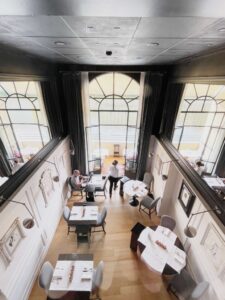 In general, Florence is not only culturally a place you can’t get enough of, but also culinary a manifesto of Italian delights. There are thousands of inviting restaurants and at least as many ice cream parlors, so I particularly enjoy the ice cream at Vivoli, followed by perhaps the best guinea fowl leg of my life at Il Vezzo restaurant. What a special evening, at a balmy 28 degrees, you can still stroll through the alleys to listen to an opera singer belting out arias. 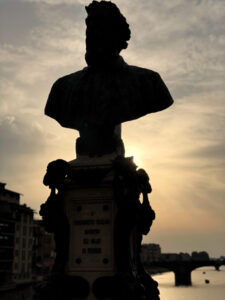 It is almost too good to be true and I pass one last time the street painters at the Mercato del Porcellino, who have already collected the chalk and destroy their day’s work with a bottle of water. The colorful illusion is washed away each evening, only to awaken anew the next morning. This is true for this city as well as for Vermeer’s drawing. 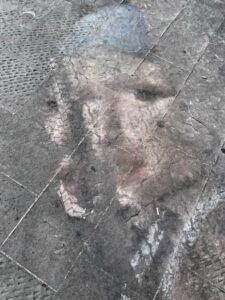 There is a stormy atmosphere over the old cemetery, Cimitero delle Porte Sante, where I wander among the tombs and mausoleums. Some are dressed up and still mourned today, others are deserted and long destroyed by the wind. 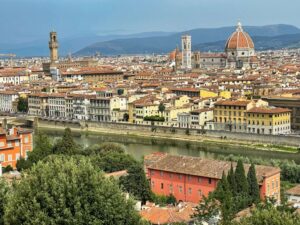 I am alone on this hill looking down on this beautiful city, as Michelangelo once did. Every now and then a drop of rain falls from the sky and dries up in the marble of the memorials. This is the place where the angels weep. 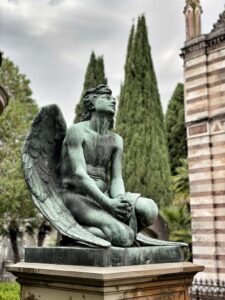 This article was written at the invitation of the Hotel Lungarno in Florence. My thanks  to the CEO of the Lungarno Collection, Valeriano Antonioli, for the inspiring conversation, the PR manager, Paola DiCredico, for the great recommendations and Barbara Schicker of girasole PR for the great organization.