I am sitting in a camp in Africa, at the foot of the Rongai Hills, my gaze wandering across the wide plain of the Serengeti, the original score of John Barry is running in the background, and I review the last four days.
The first day begins with a panic cry and I know immediately, either my wife has burned on the trickle of shower or we have a visit from the terrarium.

And indeed, a „monster spider“ hid behind the towel and occupies the bathroom at the outpost hotel of Arusha. No chance to survive, so I throw the towel and declare shower and toilet to a restricted area. Fits perfectly to this day, because the jeep from Novi Travel is already waiting at the entrance to take us to Tarangire National Park, which is located southwest of Arusha near Lake Manyara. We start with a stopover at the central market where there is more traffic than in a beehive. 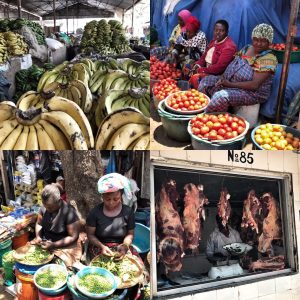 After this the highway runs directly through the middle of the Maasai area, and you see a lot of shepherds with their herds of cattle and goats dressed in their traditional shukas. The landscape is complemented by the mighty Baobab trees, which are partly over 200 years old and have a diameter of over 10 meters. 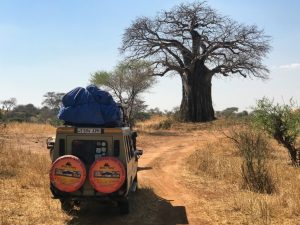 It could go on like this forever, but after 2 ½ hours we reached the entrance to the national park and our jeep is sprayed with a chemical, to protect us from the bothersome Tsetse flies. They were the real reason why the Tarangire was appointed as a national park in 1970. No one wanted to settle down in this area, except of the animals. Already at the first water hole, elephant, wildebeest and impala say cheers to another and I can see more animals than on most safaris in South Africa. 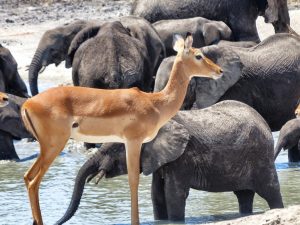 The scenery is unique and quite fast I collect buffalo, lion and cheetah. We do not need to talk about zebra, giraffe and warthog, everything is there, everything is in abundance and the landscape is more than magnificent in Tarangire, so that the crowning conclusion with an elephant family, which crosses our way, could not have painted better. Just outside the park is the Lake Burunge Tented Camp which conveys real „Out of Africa“ ​​feeling. 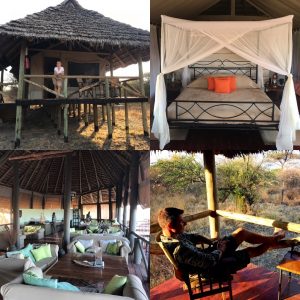 The tents are genuinely spacious with sleeping and bathing areas and all have a veranda with a wildlife view. A mini impala can be seen, otherwise it remains quiet, at least as long as we are picked up for dinner, because the path in the dark is not completely safe under hyenas. With the whistle in the mouth, I follow our guide to the open terrace, where today a top menu including live cooking from the Wok is served. The white mousse at the end brings this day to perfection and so I stroll happily under the imposing starry sky of Africa in the direction of my tent bungalow. 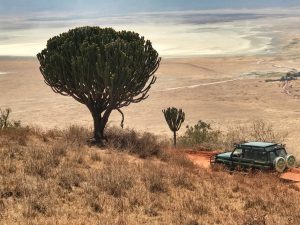 The alarm clock rings at 5.30 am and with the sunrise on the terrace, we head towards Ngorongoro Crater, perhaps the largest zoo in the world, where about 30,000 animals live in the crater base and cannot or will not leave this place. While in July / August wildebeests and zebras in the Serengeti usually migrate to Kenya, they simply stay in this place. Even the view from the viewpoint into the huge salt pan of the Ngorongoro Crater is more than impressive and correspondingly ambitious is the „bumpy road“ down, which cannot be mastered without four-wheel drive and an experienced driver. At the bottom you´ll find the full program of water buffaloes, wildebeest, zebras, impalas, antelopes and lions. 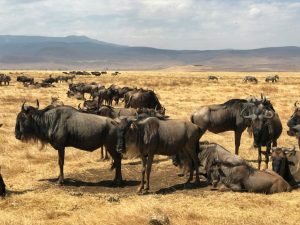 Totally mixed up, as if Noah had just unloaded his ark. Since there are many areas without any vegetation, the animals are easy to spot, even if they are not always directly on the road. It is the same with the lions and hippos, who simply do not react to the driving fast food in the numerous jeeps and simply slept the day.

Time for the lunch box and a magic picnic at the river. I look at a few hippos while bathing and enjoy the biblical scenery, always different, always peaceful, always the way the world was once and maybe never will be again.
Then we’ll go to the perhaps most famous national park in the world, the Serengeti, with a different landscape, which looks more like a wide plain. We drive almost 30 minutes without even the smallest impala, before the jeep stops and two cheetahs appear. 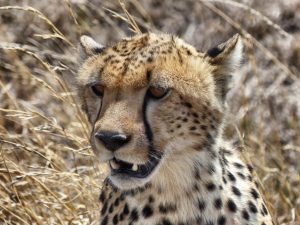 Less than three meters away, the cat lies in the thicket, stretches its muscles, and seems to smell something, long before the human eye perceives even the breath of prey. And indeed, an Impala herd tries to change the road and runs directly into the trap of the two cheetahs, which are the speed kings in the park at 120 km / h. Darwin would have had his joy, at this power demonstration of the strongest. The farther we enter the Serengeti, the more life appears in the form of green oases, in whose pools innumerable hippos stand motionless in the water. There are also the Kopjes, small clusters of granite rocks, which are used as a „chillout area“ by cliffhangers and lions, as well as the typical African acacias, which give my first leopard a wonderful hammock. 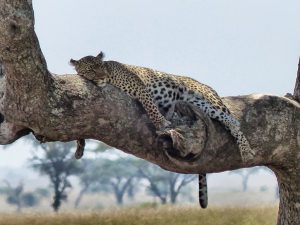 Except for rhinos everything runs in front of my lens, if not as lush and intense as in the Ngorongoro crater, but the lion’s share, with over 5,000 copies, is significantly higher.
The evening takes place in the midst of the wilderness and is the largest open air stage in the world called Kati Kati Tented Camp, which has just 12 tents that are protected by nothing and nobody from the wild animals. 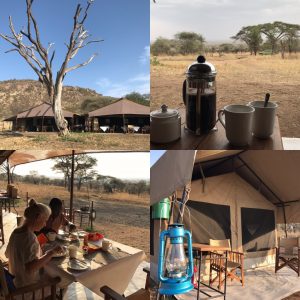 Therefore, special security measures, such as the guarded way to the dinner tent or the whistle in case of emergency, are implemented. But please do not whistle until the lion is already caught in the arm, Camp-manager Joseph reminds us, after all, we do not want to trigger a false alarm. Wifi? Mellow smile. Shower? Clear, on order. Then a kettle of hot water is placed and tipped into the tent tank. Then you pull on two strippers and enjoy a small trickle. Electricity? With the generator, there is energy between 5 and 9 pm which you can use for your Powerbank. Drinks? Oh yes, there is always an ice cold beer in the fridge.

And so I drink my Serengeti Lager at the open camp fire and remember the lion family with the five babys posing directly in front of my camera, the giraffes looking majestically over the wide plains for tall shrubs, the giant zebra herds which have long since returned from the Masai Mara, to the elephants, whose wisdom and patience should be an example to us in this fast-paced time, and of course I remember last night, when a mighty herd of buffaloes has been walking through the camp. 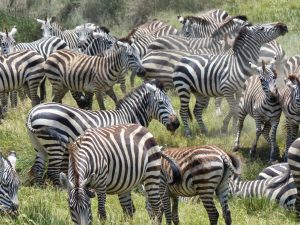 The Serengeti is perhaps the last Eden to be protected and preserved. In my heart, this landscape will occupy a great place forever and I will return. At another time, to another place. I am sitting in a camp in Africa, at the foot of the Rongai Hills …

Thanks to our wonderful guide Amani and of course to Novi Travel for the cordial support.

If you need further information or assistance with african agencies & hotels just write me a direct message: info(at)turnagain.de

Here is the story of my Kilimanjaro hike.