The climate change has now taken even the snow-spoiled city of Aspen in its lukewarm headlock. The high plateau of a stately 2,600 meters is wetted only with a slight layer of sugar and the four magnificent ski resorts Snowmass, Buttermilk, Highlands and Aspen Mountain have melted down to half.

There is almost nothing going on at the beginning of January and I park my SUV comfortably in the underground garage of the Snowmass Base Village for $ 25, which is still a snap in view of the $ 145 for the day ski pass. Skiing in the US has its price, but you get served a snow that feels like freshly plucked goose feathers. It feels a bit like champagne under your skis, so soft, so pearly, so motivating as I’m about to launch myself on a black run called The Edge from the 3,612-meter-high High Alpine. 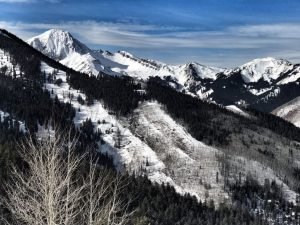 Panting, I gasp for air and almost need an oxygen machine and massage to get back on my feet, because moguls are part of Colorado like the snow-covered forests that run left and right along the slopes. It´s real fun to drive on such promising slopes as Naked Lady, Grey Wolf or Adams‘ Avenue into the depths, without colliding with other skiers. The famous American vastness has made it to the slopes of Colorado, as well as the American cuisine and bar culture. 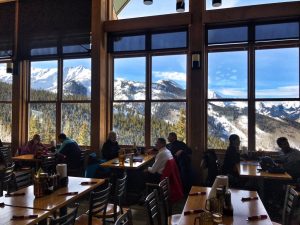 In contrast to the ski circuit in Lake Louise, Canada, there are great huts like Gwyn’s High Alpine, the Elk Camp Restaurant or Sam’s Smokehouse here, where today’s Australian Day is adorned with Aussie looks and with an all-day INXS and Crowded House rotation. With „disappear“ in my ears, I put the boards back underneath and make my way to the celebrity town of Aspen, where the fireplace is already flickering in the wonderful limelight hotel.

The reception is more than cordial and a two-man combo plays country songs at happy hour in one of Aspen’s best après-ski bars. 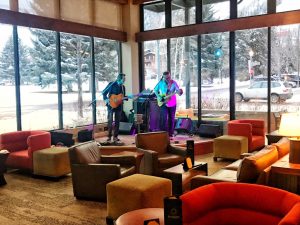 In the room is already a bottle of the finest Cabernet waiting for me and the view from the window shows me the steaming outdoor Jacuzzi. But not only the interior counts in Aspen, also the location plays a big role in America’s celebrity hot spot and here the limelight plays its big strength. 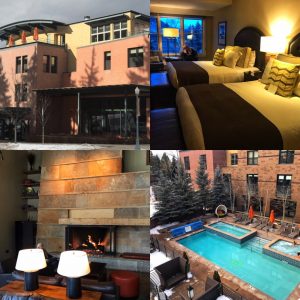 Shops, restaurants and even the Gondola Plaza are less than a 5-minute walk away. Anyway, it’s damn hard not to fall in love with Aspen immediately. Where else can you go ice skating under brightly lit Christmas trees, go shopping in the most exclusive boutiques and dine in quaint restaurants? 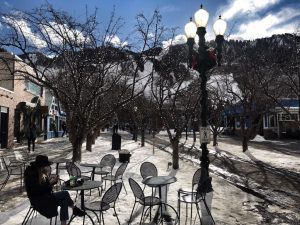 My favorite spot for the evening is the Creperie du Village, a small Frenchman who serves wonderful meat fondue and mercilessly good crepes. So, I grill my fillet of beef on a hot stone, dip now and then in the great sauces, sip the red wine, order a dessert called Big Apple, consisting of crepes, caramelized apples topped by vanilla ice cream and watch my neighbor in his marriage proposal. Well then, congratulations! 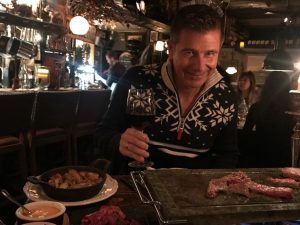 Day 2 in the skiing Eldorado promises to be an ordeal in terms of weather, as clouds with light rainfall are predicted. The only sun hole is promised early in the morning, which immediately motivates me to cancel the sleep at 5 o´clock. The jetlag helps a little, as well as the rich breakfast in the limelight. The last donut not yet digested, I am punctually at 8.30 at the Silver Queen Gondola, which brings me in epic 15 minutes on top of the 3,417-meter high Aspen Mountain, which is dedicated to the more demanding skiers, as explained to me by a German couple from Hannover. 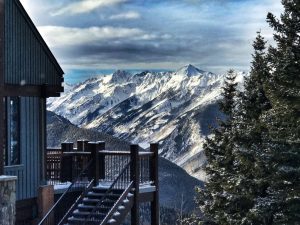 After a canceled circumnavigation they have just settled in Aspen, at least for the winter season. Not the worst choice I have to attest, because what should follow here and today, is the best snow experience of my life, especially with a fluffy 2 inches of fresh snow on the slopes. And then it goes down the hill over the „little blue“ Silver Bell and Silver Dipp to follow Ruthies Run into the valley. Nobody has left their mark at this time and my skis slide for the first time through this dry powder snow. 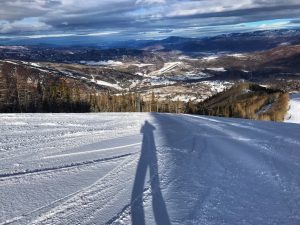 A moment for eternity and the beginning of the end, once you have driven this quality. In addition, the sun shines all day long and lets the cool guys in the bars change into the T-shirt. It seems like spring, although it is just early January and so I call the full program, because queues at the lifts are rather unknown in Aspen. Two wonderful days in America’s dream ski factory are coming to an end and my conclusion is clear: Do not drive here, do not even think about skiing, just leave the limelight on the left, because: You could fall in love with this place. 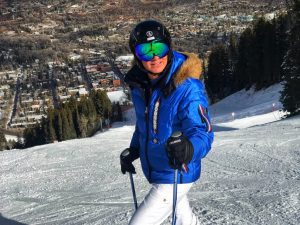 This article was created with the kind support of the Limelight Hotel and the outstanding organization of Tucker Vest Burton.

Here you can find my article about the Sorrel River Ranch in Utah.