„It’s a place of inspiration and explosive creativity. Filled with surprises, spells and magic. A place that cannot be described. You must see it, you must feel it, you must experience it“. I look into the sparkling eyes of my host Walt Wyss at the Four Kachinas Inn and feel adrenaline and anticipation rise within me. He talks about an immersive art installation called Meow Wolf, but he could just as well be talking about his hometown Santa Fe and the northeast of New Mexico.

Land of Enchantment is what it says on the license plates and that’s also the motto of the next three days, which more or less coincidentally will culminate in the crazy Meow Wolf of Santa Fe. But one after the other, because the story begins at a place that for many years could not be found on any map of the world.

From Bloomfield you drive south on Highway 550 for 28.3 miles. Then you turn right onto SR 57, which changes from tar to sand after about 3 miles. You should always keep an eye on the weather, as the road is impassable in rain and snow. After exactly 18.3 miles you leave your car and follow the old abandoned road on foot for 0.6 miles. After that you are on your own. 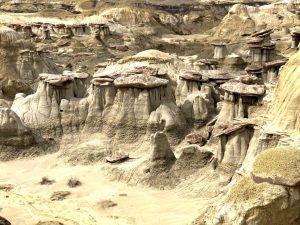 These are the few descriptions on the Internet that have led me to this moon landscape of the Ah-shi-sle-pah Wilderness in the middle of nowhere. A canyon with tower-like formations of sedimentary rock, the so-called hoodoos, opens up and seems to swallow me, as the loamy ground gives way slightly. But the fascination of having landed alone on this foreign planet makes me forget the exhausting journey. 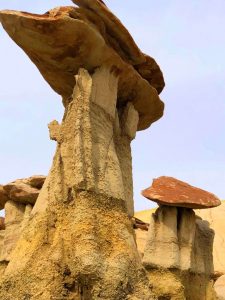 There are even more of these eerily beautiful locations in New Mexico, which a photographer accidentally discovered on Google Earth in 2012. But the sun is already leaning towards the horizon and my host Walt is waiting for me in the artists‘ town of Santa Fe.

Of course there are many hotels in Santa Fe. But those who want to do justice to the atmosphere of this extraordinary state capital should stay as private as possible in a Bed & Breakfast. The Four Kachinas Inn is located directly at the edge of the historic old town and has with Walt Wyss not only the best tour guide but also an outstanding cookie & bread baker as host. 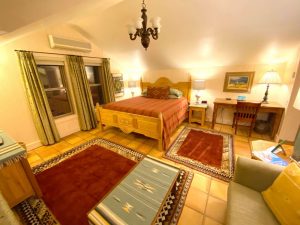 Everything is homemade and guaranteed gluten-free which the good Walt conjures up on the table in the early morning. In addition, there are six individually designed rooms in Spanish colonial style, which are perfectly in tune with the historical centre of the old town. Every morning I discuss my daily programme with Walt and include his recommendations for restaurants, galleries and excursion tips. 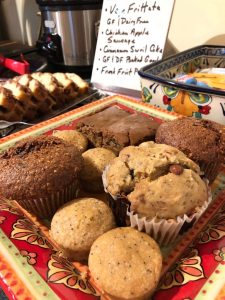 Dachshund lady Hannah keeps us company and tries to soak up one or two fallen crumbs of Walt’s famous „no knead bread“. One quickly feels comfortable at the Four Kachinas, so that two planned days suddenly become three, which I would have liked to turn into a week, because Walt always comes up with a thousand things that I absolutely have to see and experience. 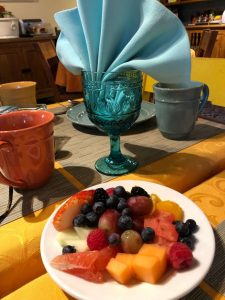 Santa Fe is unique on the planet for its architecture alone, which resembles a huge Indian pueblo. Countless galleries, museums, boutiques, cafés and the oldest church in America dominate the cityscape in the historic center and flood the senses. 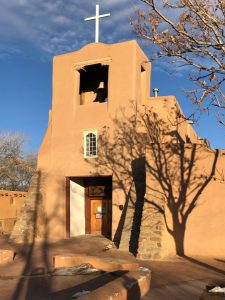 In the chessboard pattern of the streets around the central plaza, one discovers ever new inspirations, places and people. Like Stan Natchez, whose impressive gallery I discover by chance in Palace Ave. Stan opened earlier than usual today, as he still wants to draw a picture, so he takes the time to chat with me a little. With a „Don’t be so German“ he signals to me that I can calmly move from my standing place to the chair opposite to talk about his experiences in my hometown Munich. 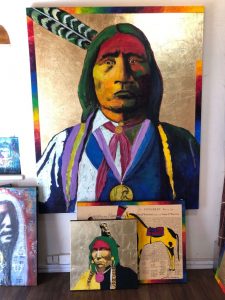 He once exhibited his paintings in the Amerikahaus, had breakfast in the Café Altschwabing and went for a spin or two on the Harley Davidson with the local celebrity Wolfgang Fierek. In the end I go home with two works of art that were not even created by Stan himself but by his son. 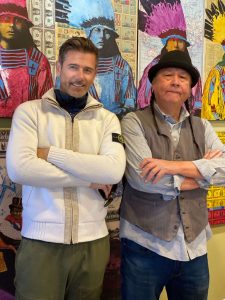 Never mind, says the proud father, who sees his gallery as a family exhibition that enjoys a unique position in Santa Fe. Those who have now acquired a taste for art and creativity should take a detour to the famous Canyon Road, where a veritable game of dominoes of galleries stretches to the horizon. 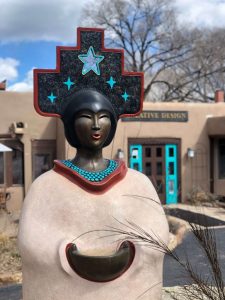 Here, art and its surroundings enter into an exciting symbiosis. 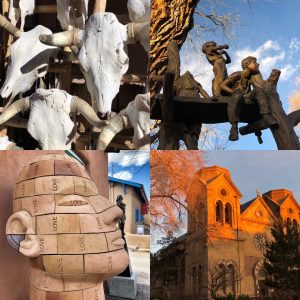 In Santa Fe, finding a restaurant means being spoilt for choice between good and great. But the decision was easy for me, because with the restaurant Martin there is a glittering star in the sky of New Mexico, which is regularly awarded and made to shine. What Chef Martin Rios serves here as a 3-course menu is not only worth its valuable airtime to the national TV stations, but also served me for two days in a row as a culinary conclusion of a perfect day. 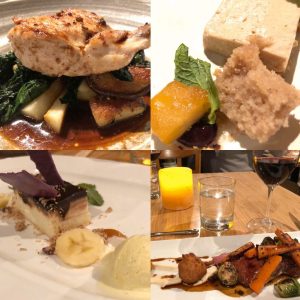 About 45 minutes outside of Santa Fe is the Kasha Katuwe Tent Rocks National Monument, which forms a crazy rock and canyon landscape, which in contrast to the Ah-shi-sle-pah Wilderness is easily accessible by car. 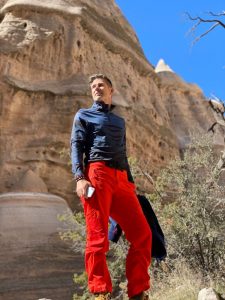 It’s correspondingly crowded on a Saturday, as half of Santa Fe is on its feet, winding its way through the spectacular Slot Canyon or looking down enthusiastically at the extraordinary rock formations. For about 3 hours I get involved with this landscape monster and enjoy the long shadows of the afternoon sun breaking on the red and white rock sculptures. 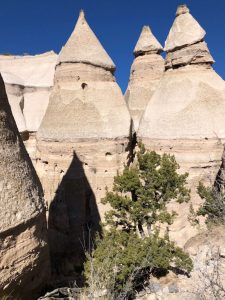 Not only Walt knows that in Santa Fe you can also do proper swings in the dry New Mexico Powder. And although he recommends the house area in Santa Fe to me, I spontaneously decide for the bigger version in Taos, which is two hours away by car and offers more than 100 runs at an altitude of 2.800 meters to 3.800 meters. 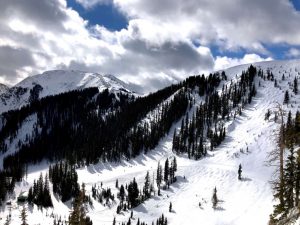 The mere thought of finding a perfect ski area between all the pueblo architecture is almost surreal. But it is also not that perfect, as the skier is first pulled by a jeep in a cattle cart from the parking area to the cash box. Relieved by 120 dollars, one then walks through a small ski resort, before the first lift without safety bar swings up to 3.500 metres. After that, however, the skier will find perfectly prepared pistes and slopes for an adrenaline rush, which spreads a little Aspen feeling. Even on a Sunday, there is not much going on at the lifts, which is not exactly true for the Bavarian Restaurant. 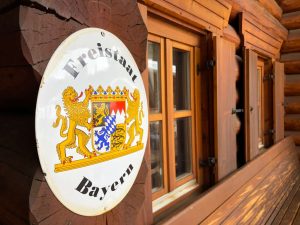 The place rocks and with its warm pretzels, the apple strudel and German Hofbräu beer spontaneously reminds me of my visit to the famous Hofbräuhaus of Las Vegas.

Hiking, skiing, art, gourmet and window shopping. What else did I miss in Santa Fe? „There is a place full of inspiration and explosive creativity. I can’t describe it, you have to experience it“. All right, dear Walt. Let’s go to Meow Wolf, the art installation that the makers around „Game of Thrones“ writer George R.R. Martin built in a disused bowling alley. Already early Monday morning, a considerable queue of visitors forms, who have bought their tickets online in advance, in order to roam the 20,000 square meters of exhibition space of the House of Eternal Return. 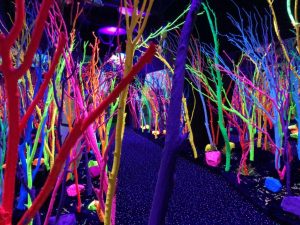 What awaits the newcomer can hardly be put into words, as the visitors not only inspect the abandoned house of a Californian picture book family to search personal items such as notes, photos and video recordings for hidden messages. No, you open a refrigerator door and end up in a travel agency for future worlds. You crawl through an open fireplace and find yourself stranded in a dream reminiscent of the fantastic 3D worlds from the Hollywood blockbuster Avatar. 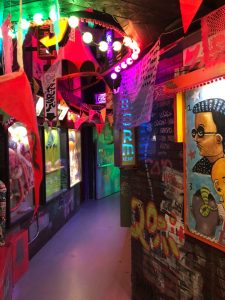 Or you slide into the illuminated drum of a washing machine and reappear in a completely different place in front of the eyes of half-scared visitors. Meow Wolf is colorful, bright, dark and scary at the same time. It’s full of creativity and crazy ideas that surprise and leave you speechless again and again. Just like New Mexico, just like Santa Fe.

Dear Martin, dear Stan. Dear Walt and dear Hannah. You live in an inspiring place whose creative power will accompany me all the way home. And who knows, maybe one day I’ll just crawl into my washing machine and reappear in Santa Fe to say hello again. Meow! 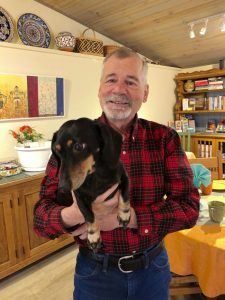 This article was written at the invitation of the Four Kachinas Inn in Santa Fe. Many thanks to dear Walt for the hospitality, the wonderful tips and the best bread in the United States.