I´m sitting on a ranch in Utah, in the beautiful Castle Valley and let myself be spoiled by Scrambled Eggs and Bacon. The view reaches from the breakfast room of Red Cliffs Lodge directly to the Colorado River, which loses much of its lurid power in winter. Every now and then a falling snowflake sails through the picture, otherwise not much happens here in January, measured by the streams of tourists drifting through Canyonlands and Arches National Parks in summer.

Meanwhile, the „first-out-then-in principle“ applies in the parks, which means that at full capacity, a car may only drive into the park when another car has driven out. If you think of the famous sunset at Delicate Arch, you might be prepared for a long wait. 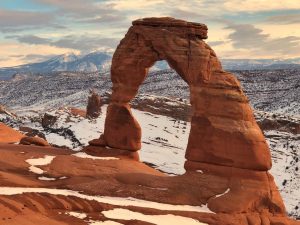 But one after the other, because I start my annual trip to Moab about 100 miles west in the Capitol Reef National Park, which is something like a „hidden champion“ among the natural wonders here in Utah. Due to the government shutdown in the US, the Scenic Drive is still closed, so that after my hike to the Hickman Bridge, I have to approach the famous Cassidy Arch via the Frying Pan Trail from the highway. 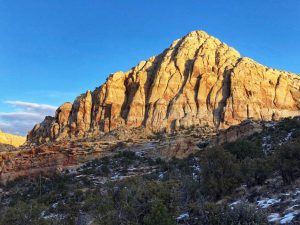 That just means a return hike of about 9 miles, which leads over a remarkable mountain ridge past the Cohab Canyon. The path is sometimes difficult to find and so one collects stone men diligently, as there are no other hikers in this area today. The landscape is always great and motivates you not to give up, just like the final point with a view of a huge arch that plunges over Bear Canyon into the depths. 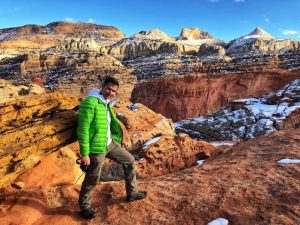 In the afternoon I head towards Arches NP, which shines like a rock in the surf in front of a huge cloud wall in the winter sun. It can’t go well for long, I think to myself and start to shoot hectically safety motives from some rocks. 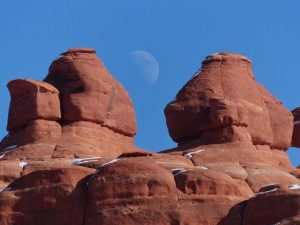 Only when I reach the Windows-Section and Roland Emmerich’s band of clouds is still in place, I get calmer and enjoy the trails around the North- and South Window as well as the spectacular Double-O-Arch. 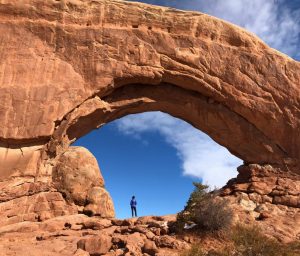 I look a bit worriedly at the advanced hour, but I don’t want to leave this place without starting the hike to the famous Delicate Arch, which shapes every number plate worth mentioning in Utah. The battle „sun against man“ begins and I manage the 2 miles (approx. 200 altitude meters) in 25 minutes, which is not quite enough for a perfect sundowner, but still a decent motif. 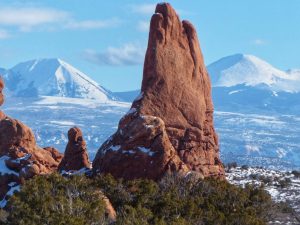 While in summer the people here sit lined up like in an amphitheatre, today a handful of hard-boiled people gather around perhaps the most beautiful rock in the world. In the end even the unspoken taboo is broken and we stand one after the other in the arch to shoot a motive for eternity. 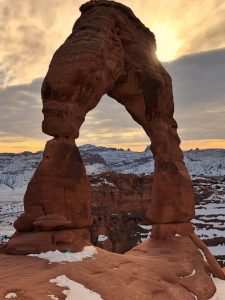 I could still spend hours here, but I still have an appointment with Judy Bane, who invited me to her spectacular Red Cliffs Lodge, located in a tributary of the Colorado River about 14 miles east of Moab. The winding Highway 128 alone is worth the trip, as you can follow the course of the river permanently and watch the prominent rocks „redden“. 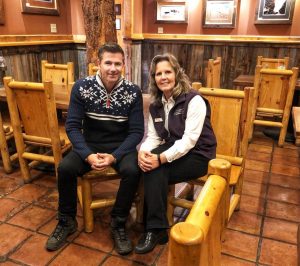 It reminds me a little of the famous Monument Valley, which was complemented by the Colorado and a lot of asphalt roads. The lodge itself seems to have originated from a western novel, as the numerous pictures and film posters document. A small museum gives an insight into the Hollywood history, where not only westerns like Rio Grande were shot here, but also current blockbusters like Indiana Jones, Mission Impossible or Back to the Future. 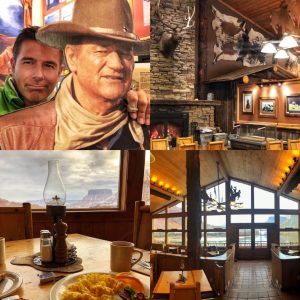 115 rooms are always occupied in summer, while in winter I have the free choice and still can use the Hot Tub or the excellent breakfast buffet. Only the famous Castle Valley Winery, Moab’s first and largest winery and the dinner experience in the restaurant fall victim to the season. 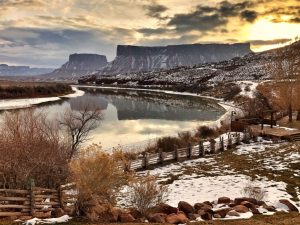 But there is an alternative that has an enormous charisma. And this is meant literally, because the Sunset Grill is not only Moab’s first address for excellent food, but also the former residence of the uranium millionaire Charles Steen, who is a goddamn legend in Moab. In 1949 he saw an advertisement of the government in a newspaper, which had offered a high reward for finding uranium. A whole 13 years later it was finally time and Charles had luck and the Geiger-Mueller counter hit the immeasurable.

A poor devil became a multi-millionaire who built a respectable villa on a hill in Moab with a pool, greenhouse and accommodation for employees. His parties were legendary and always a meeting place for all inhabitants of the then still tranquil Moab. Celebrations still take place here today, but it is usually weddings or birthdays for which this location seems simply made. In addition, the food is excellent. Be sure to try the filet mignon or the grilled salmon and let Wendell, who is our dinner guide for the evening, inspire you with the history of this unique place. In the end, not only the numerous „Uranium-Stones“ on display will shine, but also the satisfied guests, one of whom is on his way home to his pre-warmed Red Cliffs Lodge. Well, the winter already radiates an unimaginable magic on these incomparable spots of earth. 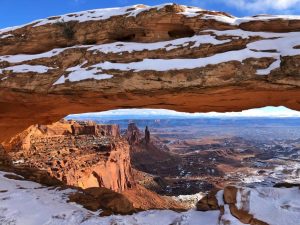 Epilogue: Of course, the western town Moab is also directly connected to the grandiose Canyonlands National Park and after my first attempt ended in a snow drift, I start a second trial to the famous Island in the Sky and Mesa Arch, which is almost installed on every Windows computer as a background image. And of course, Utah won’t let me down. Just at the right moment, the sun flashes through a painting of clouds, red rock faces and snow spots, turning this landscape into a huge happy ending. We’ll see each other again, Utah. Promised! 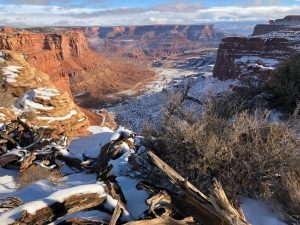 This article was written at the invitation of Red Cliffs Lodge in Moab. Many thanks to Judy Bane for the great organization.

There are even more canyons and ranches in my article about the Grand Staircase Escalante.