The morning mist still sticks like cotton candy to the wooded slopes of Piz Mezdi, while the rising sun bathes Lake St. Moritz in warm, soft light and creates a touch of melancholy in me. Are you actually happy or rather sad if you have to delete a part of your bucket list? Badrutt´s Palace in St. Moritz is a living legend that has enchanted generations of travellers and yet sits timelessly enthroned above the greenish shimmering lake.

Majestically, even hovering over things, the balcony on the top 7th floor offers an incomparable view of the Engadine mountains and I watch the rowers and stand-up paddlers doing their morning exercise while my adventure is still waiting for me. 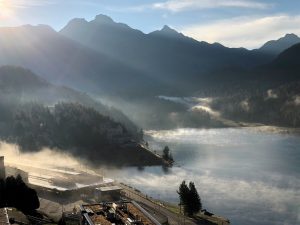 It is 7 am in the morning and the hotel corridors, the impressive Grand Hall and the wellness area, which lies 8 floors below ground in a natural cave, still belong to me alone, almost as if Badrutt´s Palace wanted to give me a very personal tour. I can almost see them, the families, couples, writers and artists who have been visiting the winter sports resort of St. Moritz since 1896 and enjoying fresh waffles, omelettes and croissants under the mighty chandeliers in „Le Restaurant“. 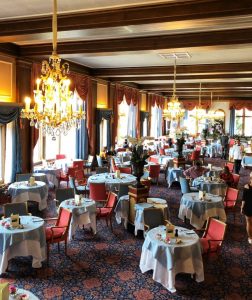 Breakfast, in any case, shines with variety, attentive service and a looseness that might not have been expected of the monumental palace. I immediately feel at ease and start today’s program at the funicular to Muottas Muragl, which takes me in 10 minutes to the 2,454-metre-high mountain of the same name, from which a wonderful panoramic path winds to the mountain lake Lej Muragl. Passing whistling marmots, the 300 metres in altitude can be comfortably mastered in 50 minutes and rewarded with a magnificent panorama in the form of rugged rocks that are reflected in the small mountain lake. 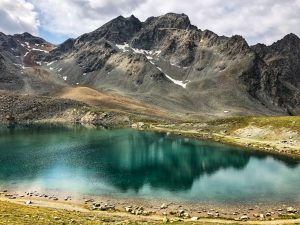 Afterwards it goes uphill to the famous Segantini hut, which was named after the mountain landscape painter Giovanni Segantini, who died here in 1899. The place is something like an open-air stage with a view of the triumvirate of Piz Palü. While Giovanni would certainly have swung his brush immediately at the end of the 19th century, I reach for the smartphone, but I can’t capture this snow-covered work of art in the Engadine mountains nearly as beautifully as Segantini. 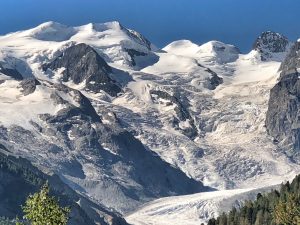 One hot chocolate later I already descend to the chair lift at Alp Languard and let myself glide down into the valley.

Back at the Palace, the heated outdoor pool is already glistening in the sun and I complement it with the long earned wellness unit consisting of sauna, mist room and the salt and aroma steam. 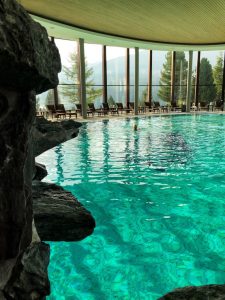 The soul is already dangling quite properly, the body is on the road to recovery, only my friend the palate is missing and sommelier Daniel Kis takes care of him first and invites me to his wine cellar. A spiral staircase rotates me several floors into the depth, before I reach the labyrinth of wine and champagne bottles, illuminated only by candlelight. Immediately I have a glass of Pinot Noir from the Old World in my hand to try one from the New World just minutes later. Now I really have to be careful not to shoot one of the carefully set up torches, because the drop goes to my head and in the Grand Hall resident manager Josef Vielhuber is already waiting for me to guide me through the historical estate.

We start with the suites of the Belle Etage, which are almost completely on the second floor. „The demand for suites is immense,“ he confirms. „Regular guests like to make reservations for the coming season and find their rooms exactly as they left them”. To ensure this, photos of the interior are taken after each visit to continue the story where it ended on the last visit. The whole thing has its price, of course, and so the 3-storey tower suite, for example, is not available for less than CHF 27,000 per night. But one enjoys the finest materials such as marble, wood and natural stone from the Bernina massif and feels the eternal breath of history, as for example in the Alfred Hitchcock Suite, in which the old master wrote the script for his film „The Birds“. We take the lift and enter the living room of St. Moritz, as the Grand Hall is also called. 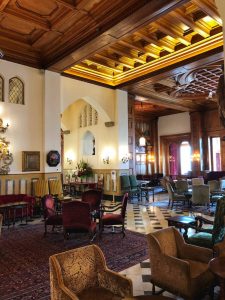 In this impressive lobby, every regular guest has a fixed table in winter and enjoys the lively bustle of snowflakes in front of the large panorama windows while having drinks and activating conversations. A hall master ensures that the rules of the square are observed and has a watchful eye on the many works of art and sculptures, including the legendary twin of the Sistine Madonna of Raphael. Johannes Badrutt had discovered the painting around 1883 in the Italian city of Reggio in a stable of a distant relative and was immediately sure to have come across an original by the Italian painter. 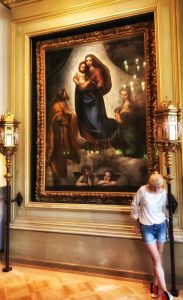 To this day, the authenticity is still unclear and to this day no expert has dared to make a final analysis, perhaps also in order not to expose an alleged forgery of the alleged original from Dresden. But one thing is certain: even if the whole palace should burn down, the picture is protected from all fires and natural disasters by a roller blind, which would immediately slide over the work of art. We enter the theatre where the New Year’s Eve gala is held every year. „Each year the celebrations have a different theme. Then the whole hotel will be decorated for this one night and transformed into a fairytale world,“ reports Josef Vielhuber proudly. „The decoration can easily cost 500,000 francs.“ Half a million for one night? I do my math for a moment, but Josef Vielhuber is already taking me to another piece of jewellery, which is housed in the former first tennis hall in Europe. 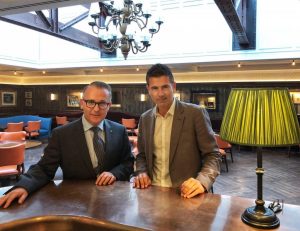 Today, the rackets are only swung outdoors, because La Coupole is the hotspot under the restaurants in St. Moritz and offers guests an unrestricted view through the glass dome roof to the palace tower including snow flurries. „Fancy a ride on the Rolls Royce?“ Josef Vielhuber pulls me out of my thoughts. „These were once part of the Queen’s fleet and are available to all our guests as transport or fun vehicles”. I can hardly believe it and I am simply deeply impressed by the many stories, anecdotes and special features of this traditional family-run hotel. Generations come and go, but Badrutt´s Palace creates a piece of eternity in the present and I count the stars above Lake St. Moritz when an Arabic menu by star chef Bahzad Mohammed Barafi is served in the restaurant. Two days end like from the fairy tale book and I crown it with an excursion to the Diavolezza, from which one enjoys the probably most beautiful view of the Piz Palü and the 4,049 meters high Piz Bernina. 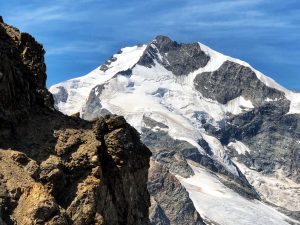 Several paths lead from the sun terrace to a few surrounding panoramic mountains, but I erroneously choose the climbing path to Piz Trovat, where after a few hundred metres in the scree I have to realize that my feeling of vertigo is not suitable for this path. A little frustrated I break off and in the end I am probably back with Alfred Hitchcock, who perhaps found the inspiration for his film Vertigo on this via ferrata. Back to the all important question: Are you happy or sad when a part of your personal bucket list disappears? The answer is very simple: You just put it back on, after all Hitchcock came back 34 times to his beloved Badrutt´s Palace. 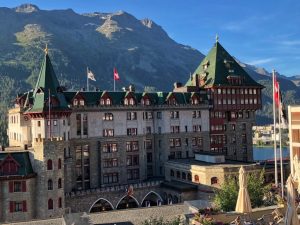 This article was created with the kind support of the Hotel Badrutt´s Palace and the perfect organization of Claudia Jann and Nicole Maier.