Even the flight to Tromsø, which is close to the Lofoten Islands, in early summer resembles an Arctic acclimatisation. While Lufthansa just gave me a „downgrade“ of -10 degrees Celsius on my way from Munich to Oslo, SAS added a shovel on the following 1,200 flight kilometres and adjusted the air conditioning to the outside temperature, so that I finally reached the rain-wet taxiway of Tromsø with only 6 degrees Celsius.

Not much going on here at the Arctic Circle, which seems to be exactly the right thing in view of the upcoming driving time of over 6 hours, because the 432 kilometres to the Lofoten stretch out into the length due to various speed restrictions (speed limits 60, 90, 50) and speed camera parades (feels every 30 kilometres). And if you think you’ve tricked them all, a Norwegian lurks somewhere in a dark tunnel, grabs the camera and fills the Instagram account of the local „Politi“ with your portrait. Be that as it may, it was at least the only dry passage on the way to Svolvær, the largest gathering of people on Lofoten with 4,500 inhabitants. Around 9 p.m. I turn off my vehicle in a somewhat frustrated way, as suddenly the sun smiles through the clouds and conjures a light like at the best lunchtime on the picturesque harbour scenery. 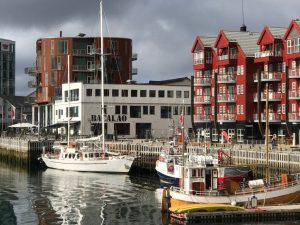 At the centre of this mirage stands the Lofoten Suite Hotel, whose modern „wood-trift-glass façade“ promises spectacular views of the harbour and the surrounding peaks. So let’s get in, because the wonderful Kirsti already awaits me at the reception and immediately equips me with the key card of a nearly 70 sqm 2-room suite with living and dining area. Only the view counts and so the architects of the Suite Hotel did not only rely on casual balconies, but also left out nearly all exterior walls and filled them with glass. This is simply terrific, even if it cannot be completely darkened at 24 hours of brightness. 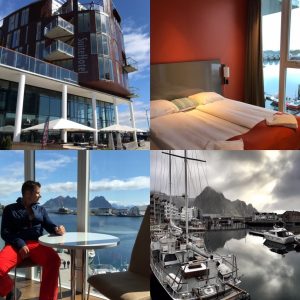 „Hunger?“ Kirsti asks me, after which I can only nod tiredly. „Burger?“ Kirsti adds one more thing and the corners of my mouth are starting to crack. „Lofoten’s best burger?“ I am back in the game, because what the Bacalao conjures up from the grill onto the plate is not only worth all honor, it beats even most of the American diners. The last impression of a day counts, so that one should always pay attention to the mood in which the inner Sitting Bull rides into the sunset. And of course, what finally lands on the campfire. 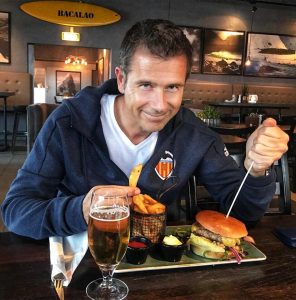 5.40 the night that was not a night is already over. In view of the 24 hours of sunshine forecast, we don’t want to create a rut and drive straight to the picturesque fishing village of Henningsvær. The place is a Lofoten settlement as from the picture book with its red fishing huts, the nice restaurants, cafés and the obligatory cod drying in the sun, which impress their idiosyncratic smell stamp on the whole area. Everywhere cod, coalfish or haddock are tied headfirst to their tails on a wooden frame and are preserved like the mummies in Sicily. Looks like a bat, smells similar, but tastes much better in the end, because the dried cod gains volume again after a 5-day cold bath and ends up on every ordinary menu. 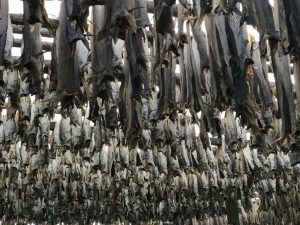 Especially picturesque are the fishes drying around the famous sports field of Henningsvær, where a school class is enjoying the beautiful weather and abusing the artificial turf for all kinds of nonsense like running on stilts, catching the ball or rubber discus throw. For the perfect Instagram shot you better have a drone in your luggage, because unfortunately only a commercial postcard of a beautiful landscape can be taken from the lighthouse hill. Nothing, however, to make friend and foe nervous.

Those who love the remains of the graffiti of Dolk and Pøbel will find it in Henningsvær, firstly in the harbour (large tank) and secondly in the toilet of the Kaviar Factory. The small Museum of Modern Art houses about 32 works of art in changing exhibitions, which can be admired on two levels. 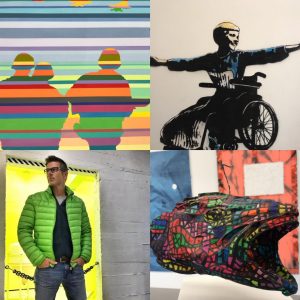 Similarly artistic is only the Carrot Cake in the Lysstoperi og Café, which belongs to the best that was ever baked and subsequently offered in free trade. Sensational!

While the area around Svolvær already makes you hungry for great landscape cinema, from Henningsvær on you can really enjoy the big wheel of superlatives. There are perfect beaches with turquoise sea at the Rorvikstranda and particularly luminous on the coastal section of Valbergsveien with the official number 815, which branches off from the main road E10 and leads directly to Valberg.

Typical Norwegian churches or cathedrals can be found in Kortvika or near Leknes (Buksnes kirke) and the ultimate island panorama on the roof of Norway, the Ballstadheia. But before I go up there, at least one cinnamon snail is waiting for me at Café Sans Og Samling in Leknes, which is served here slightly warmed and is indispensable as a culinary refreshment for the upcoming ascent. Then it finally happens and it goes to the end of the road to Ballstad, 10 kilometres away, where the trail to the famous Ballstadheia allegedly starts. 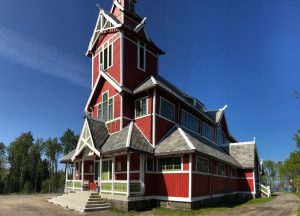 Intuitively this way is not to be found in any case, so that a young „Ballstaderin“ hurries to my help with two route suggestions. „Behind this house variant 1 begins with the steep ascent over the moss flanks up to the plateau“ she explains self-confidently and looks quite crookedly at my colourfully bought hiking gorge. „Yes. And Variant 2?“ I ask hopefully. „It’s even steeper and goes up 100 meters south at a 60-degree angle. You better take it on the way back. Sounds better. 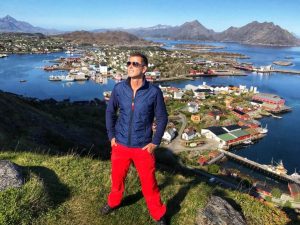 And so I quickly gain altitude and am careful to look down, because hiking trails in Norway are characterised by the fact that they are not excellent and groomed, lead directly and immediately to the top and always over slippery moss.

But after about 40 minutes I already reach the plateau, look self-satisfied at the torn fjord landscape of the colourful houses of Ballstad and send the photo to a friend in my home town of Munich. Instead of the expected applause emoji, I only get a „higher. You have to go „higher“ comment so that in the next 120 minutes I’ll be climbing all the peaks of this unique plain and can’t get out of my amazement. 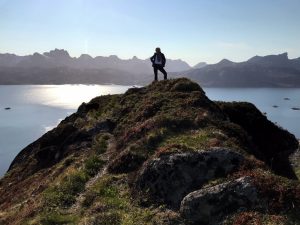 You are alone with yourself and nature and at the end you are happy about the lack of infrastructure. No hut in which Helene Fischer romps around breathlessly, no gondola that takes the first vertical meters away from you, no marking that points you into your barriers. The Norwegians have an unbelievable landscape monster called Lofoten high in the north and whoever catches an epic day with lots of sunshine will be a victim of this natural scenery with skin and hair. 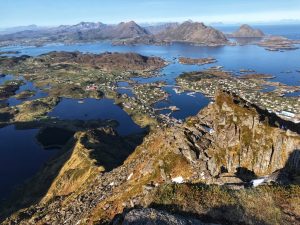 It’s already 8pm and I’m still standing on the mountain and I’m not the only one. Many hikers are  coming up to enjoy the warm rays of the midnight sun. The jagged rocks of the summit world around Ballstadheia seem like a wild mixture of Torres del Paine in Chile, the Hawaiian Napali coast and the lush green hills of New Zealand. It’s time to say goodbye to get back to Ballstad via the slightly steeper Variant 2, because finally an excellent grilled cod is waiting for me in the restaurant Du Verden of Svolvær. 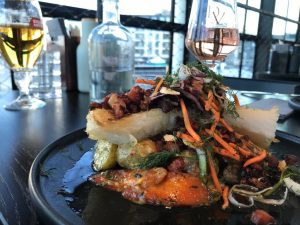 If I had to paint the perfect day, it would be this one. If I had to choose the appropriate accommodation, then it would surely be the Lofoten Suite Hotel in Svolvær.

More about the Lofoten Islands in my article about Reine.

This article was created with the kind support of the Lofoten Suite Hotel in Svolvær.