I can hardly believe my luck while I look out of the window. It is the 3rd of September and the majestic Dolomite peaks are covered with tons of snow and already give a taste for the approaching winter season. Thank goodness, the pass road to the Falzarego is easy to drive, otherwise all summer tire fanatics would have gotten bad problems, because the snowfall has even overcooked the fir trees up here.

The scenery is a real surprise for me, even more surprising than at Christmas time, where South Tyrol usually has it´s difficulties with natural snow. 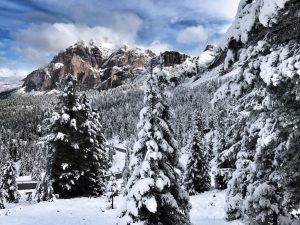 I park my car at the cableway station of the Cinque Torri and allow myself a lift upwards, in order to enjoy as quickly as possible the fantastic weather at the mighty climbing rocks. The thermometer shows frosty 3 degrees Celsius and I pull the zipper of my Mammut Runbold Light all the way up. In two weeks, I´ll hopefully be on top of Mount Kilimanjaro, so that today’s cold whip is certainly a good taste, even if the 2,300 altitudes cannot really be counted as an acclimatising training. The five steep cliffs of the Cinque Torri, which were originally composed of a single boulder, are one of the most spectacular destinations in the Dolomites and a true Eldorado for climbers who can compete here from level III onwards. 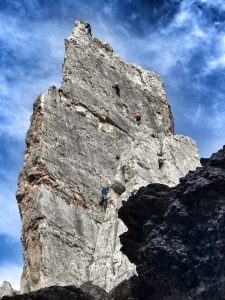 I prefer the much safer round-trip, which passes through old guard positions from the First World War, directly between these incredible rock needles. This easy walkable way is manageable in approximately 1 hour, so I pick up a little highlight for the dessert. The Rifugio Nuvolau lies on a ridge and can be climbed in dry conditions without any special walking skills. But today there is a lot of fresh snow and the already beginning thaw has melted the rocky ground. Some hikers have their difficulties so that you must do a lot of overtaking to finally reach the summit of Monte Nuvolau. 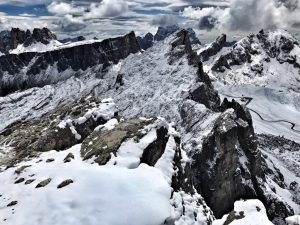 The view of the Marmolata from above is epic and actually much too good to descend directly again. But to spend the night in a snoring room with 8 foreigners is not what I have in mind today. The number 1 of Cortina d’Ampezzo has pushed itself to the beginning of the city and bears the impressive name Grand Hotel Savoia. 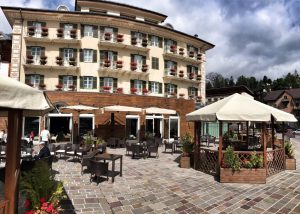 Already the entrance to this splendid 5-star hotel is so impressive that I would hardly disturb the Ferraris and Bugattis with the „front-of-the-door parking“. But the concierge still creates a gap for my Audi, which strikes itself at least colorfully against the competition from Italy. The luggage disappears discreetly from the trunk and already takes its own way to the beautiful room. On the other hand, I prefer to start my stay with an excellent caprese salad on the sun terrace and let the Chardonnay have its full effect. 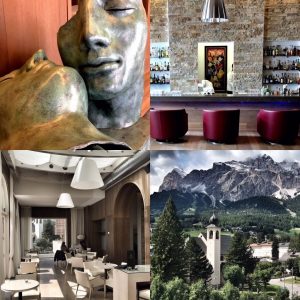 A few gentle turns are the ideal basis for the jacuzzi in the wellness area, which seems completely orphaned. So, I blow the cold out of my frozen bones and can only be pulled out with difficulty from this little oasis. 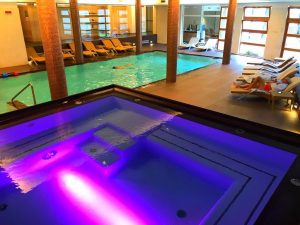 This article was published with the friendly support of Grand Hotel Savoia and Mammut.

Read also my article about the Chalet Mirabell in Merano.