„Whitehaven Beach is the ultimate experience. The drug everyone here in Airlie Beach is addicted to. If you only do one thing in Australia, go to this beach”. With these words Matt from Ocean Rafting lets me think things over. It’s about a trip in a rubber dinghy including snorkeling at the famous Hill Inlet of the Whitsunday Islands. Do I really have to think about it? With a broad grin I voluntarily let myself be relieved by 180 $ and I´m already looking forward to the drug for the following day. The restless trembling, the anticipation of the kick already starts now.

Before the big adventure a very special person is waiting for me. Jodi Hoffmann invited me to her innovative resort project Freedom Shores, where she had 10 boats converted into bungalows in a small hidden bay. 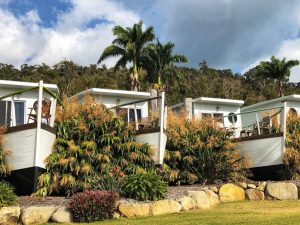 Far away from the hustle and bustle of the hippie stronghold Airlie Beach, one reaches a small paradise via the winding road, which is surrounded by the palm trees from the film „Pirates of the Caribbean“. Jodi flew them in when they were no longer needed on the set and now create a little seafaring backdrop around the boat bungalows. The project started a year ago with the small boat Denver, which still forms the front of the boat row and shows the idea wonderfully. 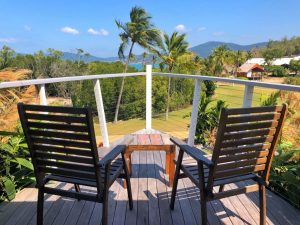 But Jodi soon noticed that it is too expensive to move original boats onto the property and rebuild them so that the guests can sit in the bow area. So, replicas were made, which provide an unusual overnight experience. Beside the boats there are also 3 suites and a bungalow that even has a private beach with a sun bed. 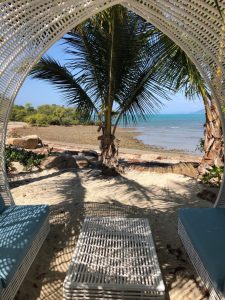 The small complex is crowned by a wonderful pool and the flanking Northerlies Beach Bar & Grill, which is not only visited by the guests, but also by the locals for the evening dinner with a sundowner. You can hardly spend a more casual evening than on the veranda of the Northerlies. Cheers to what will await us the next day! 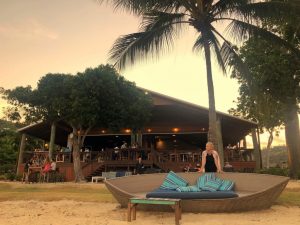 At 8.45 am I grab my Stinger Suit, which is unfortunately unavoidable due to the upcoming jellyfish season and go for the canary yellow raft of Ocean Rafting. Our skipper and DJ welcomes the young, adventurous team, whose tattoo density can easily compete with any „Bachelor in Paradise“ season and recommends us to take a seat in the back part of the boat. „Why not in the front“ I ask from the 2nd row, but „Thunderstruck“ from ACDC is already running at full volume and skipper Sam is racing against the rolling waves. My hair is backed up in 20 seconds to 70s level and I cramp against the free backrest from row 1. 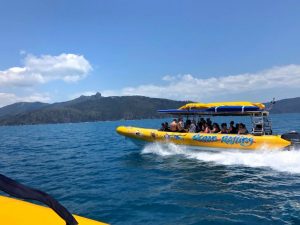 Next to me is Jane from Maine with felt 70 years, who can’t get the laughter out of her face anymore and is living through her third spring. The boat meanders through the island world for about 90 minutes before Sam lets us in the water for the first time. That means for me, put on a snorkel and my wet diving suit and off we go into the colorful coral world. 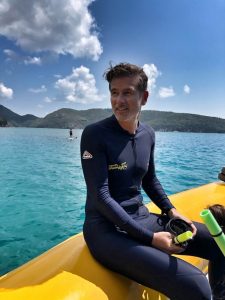 But at first, I don’t see anything at all, so that I already doubt the functionality of the equipment. But then colorful fish and lush corals alternate and leave a lasting impression of the largest creature on earth, the Great Barrier Reef. After the second dive we finally take off and approach Whitsunday Island, where nobody is allowed to stay, as the island belongs to the national park. A small path leads up to a vantage point from which one has for the very first time a view to the Whitehaven Beach that simply leaves me speechless. 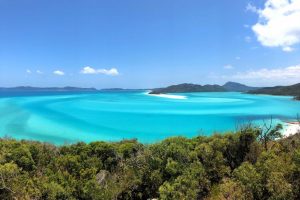 The drug, at this almost unreal place, is called quartz and makes Whitehaven the whitest beach of our earth that shines brighter than a toothpaste advertisement. The quartz is so precious that the bottling of a small quantity alone is punishable with 20,000 Australian dollars, so that the rule is always: look at it, touch it, but leave it there beautifully.

Then the ultimate kick of the day follows, because we are the only boat allowed to drop anchor into the sea at the famous Hill Inlet, the island tip of Whitehaven, and enter the white wonder like Captain Cook once did. Notwithstanding all warnings about jellyfish, I plunge into the green water and let the quartz sand glide through my hands. 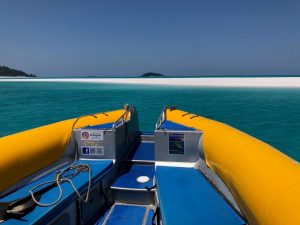 What a special feeling, what an extraordinary sight, what an experience. My smile shines as bright as if I had plastered the sand, but the lady duo around skipper Sam, who has set up a small salad bar on the raft and served a cool „Great Northern“, already provides for culinary delights. If there’s only one beach in your life, make sure it´s this one. In this sense: Make Waves. Move Mountains and make your way to the only true beach. 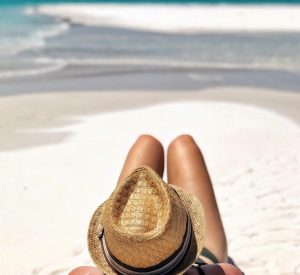 After 70 minutes the trip is over and we’re jetting back to Airlie Beach with the last sounds of Coldplays Paradise, where I say goodbye to the Ocean Rafting team and reluctantly make my way to Townsville. On the way a koala bear laughs at me from a branch fork, as if he understands exactly what it means to experience the perfect trip. 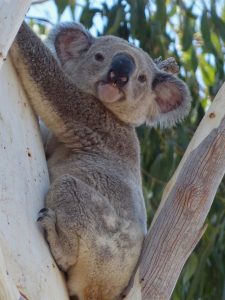 Well, my friend, if your eucalyptus tastes and numbs half as good as the quartz sand under my feet felt, it’s an extraordinary experience.

Thanks to Jodi Hoffmann for the invitation to her Freedom Shores Resort.

If you love great beaches and fine hotels then read also my article about the St. James Giuesz House in South Africa.