It was time for a visit to the second largest city in the world, where French is spoken, because so far, my trips to Canada led me rather to the Rocky Mountains or the Niagara Falls. Now I went to Québec, right in the French heart of Canada and I was curious how Montréal, this mixture of European timbre and North American skyscrapers would feel.

The flight from Munich to Montréal takes a short 7 hours and and it takes another 30 minutes with Uber to get into the city centre, where the silent private chauffeur leaves me directly in front of the Hotel Monville. „Our house opened in March 2018 and is sensationally situated“ the wonderful Clémence raved before my arrival and promptly reserved a deluxe suite with a view of the brightly lit downtown. 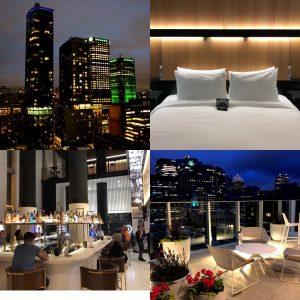 „You only have an even better view from our roof top terrace on the 20th floor“ she adds on my arrival and apologizes in the next half sentence, as you have to take the matching drinks upstairs yourself due to the lack of a license. What a luxury problem, because the location above the roofs of the city is really breathtaking, just like the whole lobby, which is architecturally more reminiscent of a Museum of Modern Art. 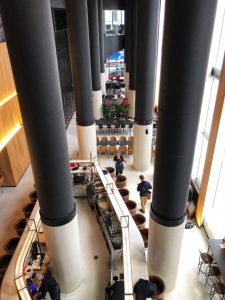 Check-in is via self-service terminal, snacks and drinks were brought by the brother of R2D2 named H2M2, who glides independently across the corridors, politely rings the doorbell, opens his cooler and releases the ordered snacks accordingly. 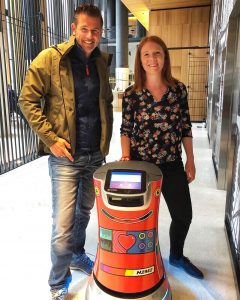 Although the Hotel Monville looks very cool and modern, the landlords rely on materials and ingredients from the region. The casings are made of Canadian oak and the first-class burgers come from cows that have grazed on the pastures of Québec. Clémence asks me about my plans for the day and recommends a potpourri of Centre Ville and Vieux-Montréal, as the historic heart of the city is called. The hotel is located exactly between these two centres, so that I start with the highlight par excellence, the Basilique Notre-Dame, which dominates the Place d´Armes impressively. 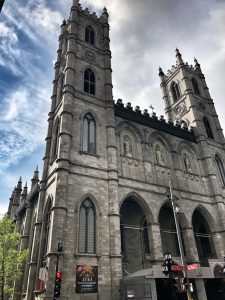 With its woodcarvings and the blue illuminated altar, it is considered to be one of the most beautiful churches of North America and offers more than 3,000 people space for mass and prayer. 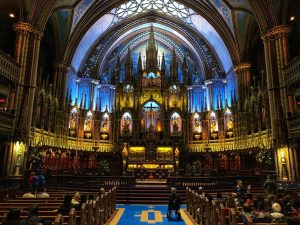 I listen to a local guide explaining to a school class why the construction time in Canada is always so incredibly long. Because of the cold and relentless winter and because of this, most streets and buildings in Montréal are always under construction in summer, which sometimes makes it difficult to change street sides or visit shops. 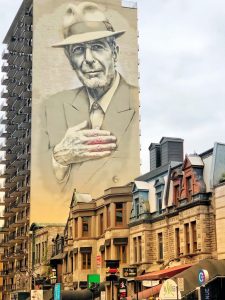 At every street corner is built, always with the vision of creating a modern symbiosis of work, culture and living space. There are fantastic corners everywhere, such as the restaurant mile in front of the Palais de Justice or the elitist Quartier du Musée, where many famous luxury labels have settled. 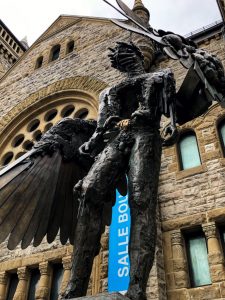 It is teeming with magnificent buildings, such as the Édifice Sun Life building built in Beaux-Arts style or the St. Peter’s replica Cathédrale Marie-Reine-du-Monde.

Yes, there is even a natural backdrop, with the 250-metre-high Mont Royal, from where you have a fantastic view over the city and the St. Lawrence River on a clear day. What has not yet existed, however, is a consistent concept for an inner centre, a heart from which all quarters and streets are supplied with flair and sights. Montréal teaches us the love of detail and it’s worth taking a stroll along the alleys of the old town, where noble art galleries and French restaurants are in the palm of our hand. 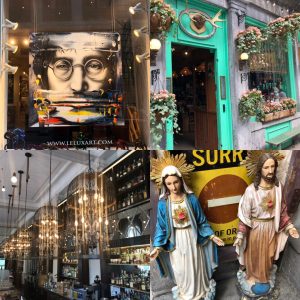 Attracted by the sounds of an accordion, I enter the restaurant Marché de la Vilette and feel immediately transported into a typical Parisian café. I think to myself that it is a nice idea to attract the guests with music until I have to realize that the volume inside reminds me of a Hard Rock Café and henceforth one accordion classic after the other is served. The Montmartre dream increasingly turns into a musical disaster, which is suddenly interrupted by 70s rock and roll sounds. But only for 10 seconds. „Sorry, only someone pushed the wrong button“. Already the accordion plays its eerily beautiful melody again, until the last bite of the Creme Brûlée has disappeared. That Montréal can play musically in a clearly higher league, proves the well known star conductor Kent Nagano, who lets his Orchestre Symphonique de Montréal ascend to the highest spheres. 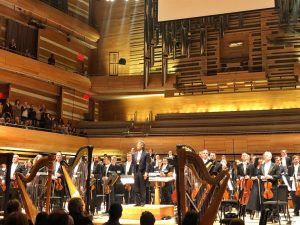 One of the best orchestras in the world is host to the Maison Symphonique de Montréal, which is bursting at the seams at the closing concert of the 85th season. The audience belongs more to the generation of the founding fathers, although Hector Berlioz’s Symphonie Fantastique, deserved a much younger crowd. In the end, however, everyone agrees that they have heard a piece of music history and acknowledge Nagano’s final tour with thunderous applause. Montréal is certainly not a city for love at first sight, but it has a strong character that will leave a lasting impression in the memory of a Canada lover. Always pay attention to the details, there are many to discover, such as the new Hotel Monville, located between the two heart chambers of this unusual city.

This article was written at the invitation of Hotel Monville. My special thanks go to the wonderful organization of Clémence Schmitt.