The ice crystals splash in wild circulation against the meter-high snow walls, while my skis plunge into the depths at breakneck speed through the narrow ice channel. The engine noise of the snowmobile is already so close that I can almost feel the breath of my followers. It won’t take much more for them to catch up with me. Just a little driving mistake, a slip, a tilting and I’m agent dust. The camera pulls up and looks at a semi-talented skier in a red signal jacket, who glides comfortably on a pull path along the glacier road and is overtaken by a snowmobile at a safe distance. Well, James Bond is always and everywhere noticeable up here, so why not me, too, who came to the Hotel Das Central in Sölden today for the personal season finale.

Seldom have I looked forward to such a weekend excursion, because Sölden was actually on my very personal winter Wishlist for ages, which was already able to buy season tickets in Zermatt, Aspen and Telluride this year.

And of course, one does not look for any hotel for the highlight, but rather for the icon, the navel of the Ötztal Alps with the name Das Central. This 5-star house is located in the middle of town and belongs to the Falkner family together with mountain railways, various restaurants and the famous James Bond installation.

I meet with marketing manager Monika Wöckl at the crackling fireplace and get initiated into the history of the house. Senior boss Hans Falkner laid the foundation stone for the development of tourism in the Ötztal valley back in the 1960s with the construction of the Glacier Road, while mountain railway director Jack Falkner has a decisive influence on today’s fun and adventure landscape in Sölden. „Snow King“ Jack not only modernises his mountain railways and lifts year after year but is also responsible for the construction of the Aqua Dome swimming and spa landscape and the Area 47 climbing and whitewater adventure world. His great masterpiece, however, is the world’s highest gourmet restaurant, the ice Q at 3,048 metres above sea level, where his own Pino 3000 matures in noble barrique barrels.

If the location doesn’t tell you anything yet, just take a look at the last James Bond movie called Spectre. Monika Wöckl tells me the exciting story of the three-day shoot with Daniel Craig, which begins with the first appearance of the Hollywood location scouts and ends with the negotiations with Barbara Broccoli and Sam Mendes, who have already sat on the sun terrace here at the hotel.  However, Jack Falkner has long been thinking further, larger and also more internationally in the form of a museum-ready James Bond installation on the Gaislachkogel, which was completed last year under adverse conditions. Monika Wöckl pulls me out of my rattling train of thought and immediately drops me off at the reception of the restaurant Feinspitz to spoil me with five pleasurable courses. Hopefully she will never know that I replaced the beef steak with a Wiener Schnitzel. But hey, we are still in Austria and Das Central is known for its classics.

The next morning, I am overwhelmed, because only the question Gaislachkogel or Giggijoch can leave its mark on a ski day here. The shuttle from the Central runs to both locations and the chairlifts Langegg and Stabele also take you from “Ga” to “Gi”. Since I have a reservation at the ice Q today, I let myself be catapulted by the Gaislachkogel I and II lifts from 1,363 to 3,058 meters in 10 minutes and am simply flashed by the 360-degree mountain panorama.

The first slopes are therefore interrupted again and again by photo stops, so that it takes some time until I really get going. The snow is in an excellent condition in the upper part, but it gets a little slushy during the descent down to the valley, so that I have to pay the wonderful descent to Sölden with proper grains. For me, the highlight of the downhill art is the ultra-long run from the Inneren Schwarzen Schneid along the glacier road back to Sölden, which is also the longest in the ski area with a total of 15 kilometres.

Afterwards I am driven to the wonderfully wide slopes at the Tiefenbach glacier, where you can enjoy the panorama from a viewing platform that rises like a footbridge into the sky. This is really skiing without ever arriving and always on the sunny side of life.

And I’m drawn to this side just on time at 12 noon, because Monika Wöckl has reserved a table for me at the exclusive ice Q restaurant. The futuristic building has nothing in common with one of the many rustic mountain huts and completely renounces music from party singers like Wolfgang Petry or Helene Fischer. But here you can enjoy an exclusive 3-course menu and sip on the outstanding Pino 3000. For me, today’s menu included beef tartare on mushroom truffle puree, a fried sea bass with green asparagus and carrot cake on curd mousse.

In the audience: The mountain world of the Ötztal Alps and of course Daniel Craig, who today appears in the form of a genuine double who then visits the exciting installation 007 Elements with me. A Bond museum on the mountain? Otherwise only Reinhold Messner can create something like this and in fact architectural parallels to the MMM Corones at Kronplatz can be found. Inside, however, everything revolves around the villains, girls and shootings of the James Bond series, which are staged in a total of 8 themed rooms with names such as Barrel of the Gun, Action Hall or Tech Lab. A spectacular highlight for me is the separated cockpit from Spectre, which was hung up in a splinter rain in front of the snow-covered mountain scenery.

While the Craig double is eagerly available for photos, I’m already getting used to the sunlight again, as I still have 90 minutes left until I meet Jack Falkner at the reception of the Hotel Central. After James and Jack I go straight to the water world of Venice, as it has been recreated here in the Hotel Central in the form of swimming pool, Jacuzzi and sauna landscape. 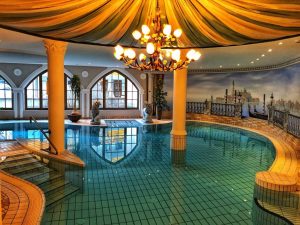 But I can’t sweat out as many calories as I eat in the following gourmet dinner, but the rump steak including tiramisu simply has to find a buyer. Surely I won’t have an appetite for breakfast the next morning, but fresh scrambled eggs, bacon, salmon, poppy plait, pancakes and Bircher muesli speak a different language and a man of pleasure turns into a round Smiling Face Emoji. What a weekend, what a grandiose hotel and, above all, what a snow and glacier landscape around the James Bond Restaurant ice Q. „Will I also come to Sölden in summer“ Monika Wöckl asks me at the end of my trip. Oh Monika, I will never really be gone. I promise! 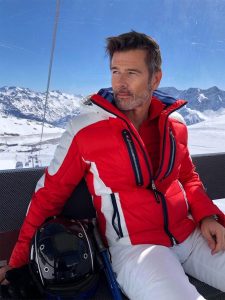 This article was written at the invitation of the hotel Das Central in Sölden. Many thanks to Monika Wöckl and her team for the great organization.